The story of the rise and fall of companies like HeathKit and Radio Shack is a fascinating and complex subject. I’m going to restrict this to the comeback of both companies. One is almost certainly doomed to failure. The other might manage to hang on and perhaps even succeed.

I began getting emails from the company that were a bit, well, odd and, frankly, stupid. Vague announcements that said nothing, press releases that seemed to promise a lot but if you actually read the words, said, well, nothing… They had a web site! Hooray! But there was, well, nothing on it. They kept issuing press releases that promised new kits, upgrades to old kits… Sort of? If you ignored the fact that the tiny, tiny type at the end hinted that, well, maybe not…

Finally, at last, HeathKit is back! Hooray! Yippee!

Yeah, well, don’t get out the champagne just yet, because after all the years of the hype, all of the build up, all of the promises, what we got is this…

Yeah, that’s it. An AM radio kit. Oh the joy, oh the rapture… Break out my blood pressure pills someone before I faint…

Note the ultra clean, modern hipster design that eliminates all those unnecessary bells and whistles. Like labels. Or a dial indicator to tell you what frequency it’s tuned to. Or a volume control. Or some kind of indication that the thing is even turned on.

Well to be fair, you don’t need a volume control, I suppose, because it doesn’t have a speaker.

Oh, there’s a speaker for it, or there will be one “real soon now”. A powered amplified speaker. At extra cost, of course. Oh, goodie…

Meanwhile, just plug your headphones into one of the two (Yes, Two! Count them! Two!) headphone jacks.

And all of this can be yours for just $150! Damn, where did I put my blood pressure pills…

Oh, brother… Look, I am going to be brutally honest here. This is just ridiculous. Look, I could literally build this radio out of parts from the junk box in the basement for nothing. Even if I had to buy all of the parts brand new it would cost me less than $30. And for that I’d throw in a speaker and some labels.

But, you say, they must be selling something besides just this, right? Their entire inventory can’t consist of a single radio?

Well, no. Not really. You can get some parts for an old nixie tube clock, a ‘stealth’ VHF antenna that you could build yourself for half the cost, and copies of old HeathKit manuals, and that’s about it. Oh, and little plastic cups for a wind speed indicator.

Now let’s look at the remains of Radio Shack. Yes, it’s still around. While large parts of it were sold off during the bankruptcy, it entered into some kind of partnership with Sprint, and it looks promising.

One of the biggest problems Radio Shack had was it’s entry into the cell phone market. Now the problem when you’re a brick and mortar store that sells cell phones is that people know where you live. In other words, if something goes wrong, they come pounding at your door and demand you fix it. Right now!

This takes up a hell of a lot of time on the part of the sales staff. Which means they can’t take care of people who actually want to buy stuff. Almost every time I’ve been in a Radio Shack store, anywhere, in the past few years, I’ve never been able to actually get someone to take my money.

Seriously. I’d be standing there with whatever little gadget or part I wanted, money in hand, right there at the cash register, and I’d end up giving up in disgust and putting it back and leaving after standing there for ten, twenty, thirty minutes, and all because   the staff were trying to activate phones, or trying to explain why your dropping your phone in a toilet is not their problem or whatever.

Needless to say, this business model was not very successful. It’s hard to make money in retail if your staff is too busy with non-paying customers to even ring up a sale.

But Sprint is now taking over the cell phone part of the business, and will have their own staff in the stores. Radio Shack will, I’ve been told, be Radio Shack once more, selling dopey little gadgets, toys, and even actual real electronics parts and tools.

And it may actually be happening because I ran into this…

Yes, it’s a kit. A Radio Shack branded kit. In this case a Theremin, but there were a half dozen more on the rack along with this one. And there were parts. And soldering kits. And multimeters. And breadboards. And power supplies. And, of course, the usual selection of goofy, stupid and sometimes fun little gadgets.

I picked it up for $20 because, well, come on… A theremin? Admit it. You’ve always wanted one.

Now, you can imagine which one of these companies I think has a better chance of successfully resurrecting itself.

One of the things you believe when you get a 3D printer is that you can justify the cost by making useful things with it. Well, generally speaking you quickly forget about that idea, because A) it means you have to learn how to use a CAD program and you don’t have the time or ambition to do it because you’re as lazy as I am, and B) There isn’t much out there in pre-existing .STL files that’s of any practical use for the average person. So you end up printing cute little ornaments, weird statues, and lots and lots of pencil holders…

But I finally had a chance to make a real part for a real thing!

Eldest son has, I’m afraid, inherited my fondness for ridiculousness, and has been playing around with laser cutters of late, and needed a peculiar type of nozzle for some kind of air handling system of his laser engraver. So we came up with this…

The nozzles came out about as close to perfect as you can get, except for the one on the far right, which is a result of the filament breaking for some reason about 75% into the print run. 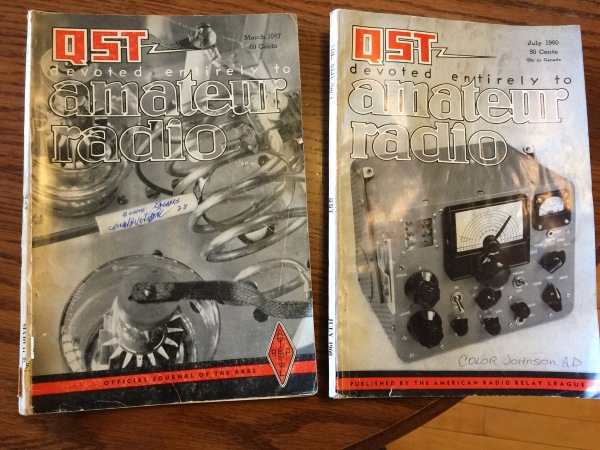 I’ve had the good fortune of obtaining, over the years, a few choice issues of old magazines and other publications, and it is irresistible to compare the modern version of those publications with their descendants. Some of these more technically oriented publications like QST and CQ have been around for a long time indeed, with QST going back around 100 years, and CQ having been around for fifty or more.

One thing that becomes glaringly obvious as soon as you open one of these old magazines is just how incredibly bad their descendants have become, at least from a technicians point of view.

Open a QST or CQ magazine from the 1960s, and you’ll find yourself quickly overwhelmed with circuit diagrams, schematics, mathematics, construction articles… If you had a basic knowledge of electronics, could read a schematic and follow instructions, you could build yourself one hell of a nice set of communications equipment just from the articles in the magazines. Not just transmitters and receivers, but linear amplifiers, antenna tuners, a wide variety of essential testing equipment… Just from reading the magazines you could build all of it if you had the ambition to do so.

There were articles about improving commercially made equipment, fixing quirks in existing equipment, modifying it to get better performance. Articles about converting military surplus equipment for ham use.

When’s the last time you saw an article in CQ or QST showing you how to build a complete receiver, a complete transmitter? A full blown linear amplifier?

The list goes on, and on, and on… Articles explaining everything from basic radio theory for novices to material that would challenge the experts. It was all there…

QST is, frankly, hardly worth the effort to open. It seems to be devoted almost entirely to “radio sports” (now there’s one of the most ridiculous uses of the term ‘sport’ I’ve ever heard), DX expeditions begging for money to fund a half million dollar trip to an island so small it only exists at low tide, and the ARRL’s attempt to turn amateur radio into a division of FEMA. About the only thing I read is The Doctor Is In column and the advertising.

CQ is a bit better, but not by much. At least it isn’t under the delusion that ARES is the only thing keeping the country from descending into chaos.

It’s sad to say, but I’ve learned more about electronics and radio from publications dating back to pre-World War II than I ever have from their descendants.