I’m afraid I’ve been neglecting this blog recently because, well, to be honest, not a heck of a lot is really going on this time of year.

The tomatoes are going crazy this year. They’re almost chest high and at least 4 feet wide at this point, and loaded with fruit. In about a week or two at the most we’re going to be able to start picking tomatoes. If we manage to avoid blossom end rot and other problems this year, we’re going to have more tomatoes than we know what to do with.

I’m not sure why they became this ridiculously prolific this year. MrsGF pointed out that we added a lot of compost to the beds this year and top dressed with a very mild fertilizer. But even so, this is a bit much. The wire tomato cages are starting to collapse from the weight of the plants and I’ve had to put in additional rods to keep the cages from collapsing.

I don’t know why I bother with the wire tomato cages they sell in the garden centers around here. They just can’t handle the plants we grow here. I think I’m going to have to go get some rebar or something like that, fire up the torch and weld up my own.

We put in 2 varieties, Early Girl and Wisconsin 55, and both seem to be doing equally well.

We’ve been getting raspberries too this year. MrsGf’s sister gave her about a dozen plants a couple of years ago and they’ve completely taken over the corner of the garden where they were planted.

We aren’t getting a huge number, but enough to give us a nice sized bowl full every few days. I’m not supposed to eat them anyway. I have  diverticulosis which, fortunately, has never flared up on me, but I still need to be careful. I’m supposed to avoid eating things with seeds and chopped nuts, which means raspberries are on the avoidance list. But, well, come on, fresh raspberries right off the plant? I’m afraid probably half of the berries we get never make it into the house. 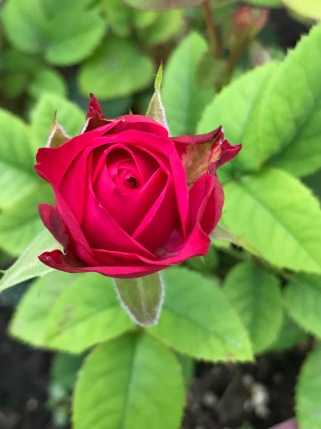 I picked up one of those goofy little roses in a teacup that you see at discount stores sometimes for MrsGF one day because I thought it would look neat on the window sill in the kitchen for a few days, and then it would probably die and we’d toss it and that would be the end of it. Well, MrsGF transplanted the dopy thing into a larger pot, stuck it outside and it’s been going crazy just like the tomatoes have. It’s quadrupled in size and has been putting out brilliant red flowers ever since.

We’re going to try to keep it through the winter and see what happens. If it makes it, great. If not, no big deal. It only cost me something like $5

I just realized the other day that I’ve put more miles on the bicycle than I have on the Corvette this summer. Nothing wrong with that but it does seem a bit odd for someone who enjoys driving as much as I do. MrsGF and I haven’t really managed to get away on a vacation this summer. Since, oh, 2007 or so, we’ve managed to get away for a couple of weeks or so to go somewhere, usually out west. And I used to go to South Dakota, Montana and Wyoming at least once during the summer by myself if I could. One year we took a three week road trip on the motorcycles with Eldest Son out to Maine.

One reason is MrsGF has been crazy busy this summer. The state is trying to bring an electronic health records system on-line before winter and she’s involved in that and you wouldn’t believe how difficult and complex that project has been. Plus she’s going to be on the road now for two days to do audits. She’s managed to get a few days off here and there, but any kind of real vacation for her is going to have to wait until October.

She’s still planning on retiring in March and is really looking forward to that. She’s already been looking into getting into the Master Gardener program. One local charity is pushing to get her on the board, and I’m threatening to run her for town council <grin> just to keep her busy..

Right now there is considerably controversy about the Technician class license, which has become the entry level license for amateur radio.

AR is in a rather odd situation at the moment. We are seeing record numbers of new licensees. The latest number I’ve seen is that there are over three quarters of a million holders of an amateur radio license, most of them holding the Technician license. This may sound like amateur radio isn’t doing too bad since we have more than 750,000 people in the hobby and that number is growing every year. But there are some concerns.

First, most of those new Tech licensees don’t seem to be actually using that license. We should be hearing them popping up on those parts of the spectrum where they are licensed to operate. Only we aren’t. Tune in the local repeaters around here (and everywhere else, apparently) and you almost never hear any of the new licensees on the air. And we never hear them down on the HF (shortwave) frequencies where they are permitted to operate.

Second, the vast majority of Tech licensees never upgrade their licenses to General or Extra class to get access to all of the HF spectrum. They get the Technician license and stay Technicians.

A lot of people find this troubling. If these people are getting their licenses and never actually using those privileges, or using them only very rarely, why aren’t they? Obviously they were interested in amateur radio in the first place or they wouldn’t have gotten the license. So why aren’t they actually using it? And why aren’t they eventually upgrading to the General or Extra license?

The ARRL thinks it’s because the Techs only have extremely restricted access to the HF bands. Below 50 mHz, Techs can legally only use a very small portion of the 10 meter band for voice and CW. And below the 10 meter band they only have access to an even smaller range of frequencies, and there they can use CW (morse code) only. The ARRL believes that if Techs were granted expanded privileges on HF they would be more interested in AR and actually get on the air, and even become interested enough so they would upgrade their licenses to gain more privileges.

The problem with that is there is no actual evidence to support that belief. The ARRL is basing that on the results of a very flawed survey that almost no tech licensees actually saw or responded to, and on little more than wishful thinking.

In any case, any Tech who is interested in the HF frequencies can get access simply by taking the General license test. It isn’t that hard. Seriously. It isn’t. A current Tech license holder could easily pass the General with minimal preparation.

I don’t particularly care if the ARRL gets this past the FCC or not, to be honest. It isn’t going to effect me one way or the other. I rather doubt the FCC is going to grant the ARRL’s petition. I suspect the FCC will point out to the ARRL that if Techs want access to HF they should just take the General test.

6 thoughts on “Catching Up With Stuff”