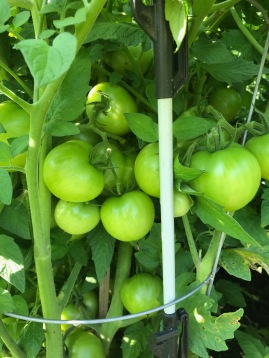 I don’t think I’ve ever seen our tomatoes look quite this good. The plants are amazingly lush and have gotten absolutely enormous. The two Wisconsin 55 plants are about 4-5 feet across and would be probably 4 feet tall if the weight of the fruit wasn’t pulling the stems down. The tomato cages have proven woefully inadequate and have started collapsing. It’s ridiculous. The other variety we planted are Early Girl, a smaller tomato, but they’re just as lush and prolific as the 55s are.

And judging from the color, it looks like what MrsGF and I are going to be doing by the end of the week is processing tomatoes into sauce, soup, and just canning/freezing them.

I got the first ripe one of the season yesterday. I saw it peeking through the dense canopy of leaves, a flash of red, did some digging around and there it was. I still get a bit excited when I find the first tomato of the season. I found a total of three yesterday.  The rest are still pretty green but they’re coming on fast.

I’ve also found, alas, a few with blossom end rot. But only a few, maybe three or four. The rest look pretty good. Blossom end rot hits tomatoes and peppers both, and is apparently linked to a calcium deficiency in the soil. We were thinking maybe starting to save eggshells instead of putting them in the compost going down to the compost site and try an experiment with crushing them and soaking them in water and using that to water the plants next year. MrsGF said the nuns did that at the convent back when she was almost a nun. Yeah, seriously, MrsGF was almost a nun. How I “stole” her from a convent has apparently become part of the family oral history. Sigh…

The banana peppers are in full production and are just as loaded with fruit as the tomatoes are. We’re starting to chop and freeze them. They’re easy to deal with. Just clean ’em, dice them up, stick them in freezer bags or an airtight container and chuck them in the freezer and pull out for omelets, soup, sauce, pizza or whatever when needed.

There were supposed to be sweet banana peppers. Emphasis on the word “supposed”. Some of these stinkers are downright hot, with a few pushing the heat level of jalapeno peppers. The flavor is amazing, but the heat is something some of the family members don’t care for, so we’re going to have to use these with some caution. We have a few sweet bell peppers, but they don’t look like they’re going to produce very well this year for some reason.

MrsGF put in 3 squash plants this year in the garden at the back of the garage and they’re pretty much taking over everything back there like they did last year. The vines grow astonishingly fast. We’re constantly pulling vines out of the lawn, out of the raspberries, out of the rhubarb… They look like they’re doing pretty good too. We’re seeing some nice sized squash already and lots of baby squash just starting to develop.

We have 3 cucumber plants grown from seed and they haven’t been very successful this year. Very spindly vines and very few cukes. But that’s not a real issue because I’m the only one who really likes to eat fresh cucumbers anyway. As long as I get enough to make a fresh cucumber salad once in a while I’m happy. 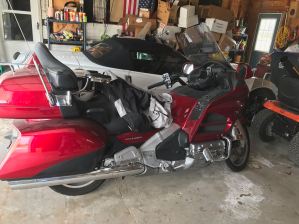 Other stuff — I worked out a deal with Eldest Son on my Honda Goldwing. With her back and knee issues it’s almost impossible for MrsGF to get on and off a motorcycle any more, so the Wing has sat mostly unused since I got it. I’ve had it since 2013 and it has a whopping 3,400 miles on it. Sigh… So I worked out a deal with ES. I don’t want to give up on biking, so we’re doing a swap, his Honda VTX, which is really a one person bike, for the Wing plus some cash and other stuff.

We worked out the deal last winter but we still haven’t gotten around to actually swapping bikes, so the Wing is still parked in the garage. We were going to do the swap at the end of July but… Well, the Wing had a bad battery and the VTX needed new front fork seals so here there you go… The shop he goes to has a 2 week backlog for repairs. Oh well…

We used to do a lot of motorcycling, MrsGF and me. We took our BMW literally all over the country. We put about 50,000 miles on that bike in the few years we owned it and had a lot of fun. Then I traded it off on the Wing and– well, the problem was not long after that I got the Corvette too and, well, you tell me which you would rather do, go on a long trip on a motorcycle in the heat, cold, rain, etc, or go in a convertible Corvette which is comfortable, has a top you can put up to keep the rain out, air conditioning (it was 107 degrees when youngest son and I were out in SD with it), and a decent sized trunk.

Fuel economy better on the bike? Yeah, well, you’d be surprised at how poor the milage is on these big touring bikes and how good it is on the Vette. The Wing gets, at best, 34 mpg cruising at 55. Add MrsGF, our clothes, the trailer, and we’re lucky if we get 30 MPG on the thing when fully loaded.  And milage goes down fast as the speed ramps up. The Vette gets about 25+ if I don’t get silly.

Well, to be fair, the Vette has it’s own ‘issues’, so to speak. Like tires costing $500. Each. And oil changes costing about $100+ because it holds about 8 quarts of high end synthetic (i.e. expensive) oil. The only reason I can afford to operate it is that I don’t drive it much. And it sounds like a jet fighter taking off when you put your foot down because of the headers and Borla exhaust and, well, that part is more of a plus than a minus…

There’s an urban myth about this car setting off car alarms with the exhaust noise if you really rev up the engine and let it snort and, well, turns out it isn’t an urban myth. Not, of course, that I’d know about something like that from personal experience. Nope, not at all…