Weather news has been pretty boring around here, which isn’t a bad thing. Mostly it’s been hot. Like large parts of the country (and apparently large parts of the world) we’ve had unusually warm weather during the last couple of weeks, but that seems to have moderated.

What’s been interesting is the lack of storms here. We haven’t had a single thunder storm here all season. At least not one that amounted to more than a few distant rumbles. Storms have gone all round us, north, south, etc. But pretty much nothing has rolled over the county since the start of storm season. It’s been so odd that people are starting to wonder what’s going on.

There is an old theory floating that because of our location between Lake Winnebago and Lake Michigan, some kind of updrafts or downdrafts or some other curious effect caused by the two lakes does something to keep storms away. I’ve heard this theory before and it is nonsense, really. All it takes to debunk it is a quick glance at past weather data. If you look at the historical data you quickly see that this area is just as prone to severe weather, thunder storms, and tornadoes as the rest of the state.

The garden is going gangbusters. The hot temperatures and high humidity have everything growing like crazy. The tomatoes up there in the lead photo are absolutely lush and loaded with young fruit. The pepper plants (what in the world are we going to do with all the peppers we planted? What were we thinking?) are loaded with blossoms an young fruit. The two squash plants are looking good. The cucumbers look a bit ragged, but I’m the only one who eats fresh cukes around here anyway so if they don’t do good no one cares. Lettuce, we have so much lettuce we’re getting sick of it and the onions are now big enough that we can stop buying from the store and just run out to the back yard and pull a couple when we need them. Green beans are looking good after a few issues earlier in the year. Even the parsley, which got in very late, is up and looking good. We have sunflowers starting to blossom. It’s a great time of the year.

Keeping up with watering is a pain. It’s been pretty dry over the last couple of weeks and we have to water everything almost every day now. But that’s not unusual for this time of year.

Out on the trails it’s been beautiful, but the hot, humid weather makes it a bit troublesome. I carry about 2 quarts of water with me when I go out and go through at least half of that by the time I get back. Depends on the temperature and how hard I push it. I’m not a ‘power biker’ by any stretch of the imagination. I’m lucky if I keep up an average speed of 8 – 9 mph when I’m out, and I rarely go more than 10 – 15 miles. And there are always surprises, like that photo above. That, believe it or not, is a flock of about 30 pelicans having some kind of feeding frenzy on the river down by the old stone bridge on Irish Road about 4 miles out of town.

I never expected to see pelicans way out here. They generally stay close to the bigger lakes, like Michigan and Winnebago. Seeing a whole flock of them feeding in a tiny river like this was quite a surprise.

This was another surprise: 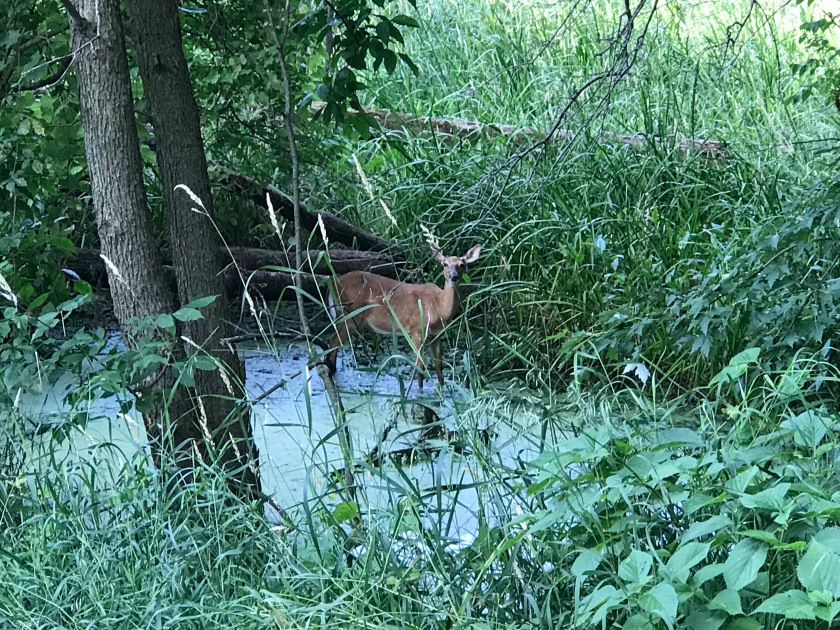 This goof is probably the one that scared the hell out of me the other day when it bounded up onto the trail right in front of me a week ago. I’ve been seeing an unusual number of deer out in the open this summer, even in broad daylight. According to the old timers it’s because the mosquitoes and biting flies are absolutely vicious this year and it’s driving the deer out of the woods. Judging from my own experience, that’s probably true.

The mosquitos this year are horrible. If I get within 5 feet of the tomatoes or raspberries or other fairly dense vegetation after about 5 pm and I see clouds of the damned things come swarming up out of the plants and heading straight for me. It’s gotten to the point where I’m considering chemical warfare. I don’t like using insecticides for a lot of reasons, but it’s gotten so bad it’s impossible to go in the backyard. And considering West Nile Virus is popping up all over the place, well… I start eyeing those cans of foggers on the shelf and it’s damned tempting.

Out on the trail it’s gotten bad too. I can’t stop anywhere in the shade or I get swarmed by the things. Out in the sun on the road where there aren’t any trees or bushes it isn’t too bad. But on the trail itself you don’t dare stop for more than a few seconds.

Speaking of biking… It looks like I’m going to have to put new tires on the bike by the end of the month. They’re starting to look a bit worn. I have to admit I don’t know how many miles you’re supposed to get out of a set of bike tires, but I have about 1,100 miles on these now.

Yeah, that’s right, 1,100 miles. I’m a bit surprised by that. The odometer reads 1,000 miles, but I put over 100 miles on the bike before I put the odometer on it, so 1,100 is probably pretty accurate. If you’re an avid biker that probably doesn’t sound like a lot, but for a 64 year old grouchy old fart who hadn’t been on a bicycle since 1980? That’s kind of surprising.

Speaking of biking, I’m going to get out for a while before it gets too hot.

One thought on “Still More Stuff!”