is finally completely finished! We got all of the plantings done and finished up mulching it the other day. Still want to rearrange those slate pavers as stepping stones going through the crushed lava rock. And those dopey lupins. I don’t know about those. I don’t like them there. I think they detract from the effect I wanted. And the things are ridiculously invasive. But MrsGF likes ’em. The two bird houses were made by eldest son a few years ago. We just put the things out there and we’d hardly had the posts in and we had birds moving into the already.

It’s still ridiculously wet around here. We just got another two inches of rain the other day. To give you an idea of how wet it is around here this is my backyard not far from the new raised bed in the first photo. You can see I’m standing in about an inch and a half of water.

The ground is so saturated with water that even this morning, more than 24 hours after the rain finished, even the high ground in the yard squishes when I walk across it.

Out in the countryside it’s just as bad. The corn is up, barely. At least where the farmers could get it in the ground. This time of year it should be, oh, eight, twelve inches tall, the old “knee high by the 4th of July” saying is reasonably accurate. Almost none of the stuff I’ve seen is more than about four inches at the most.

On the good side, Mr. Spiny, our rescue cactus, is having a grand time tucked away under the eaves of the house. I started to try counting the number of new pads and gave up after I hit 20. We’ve had this guy for what, must be four years or more now after we rescued him from the town compost pile and it’s been thriving ever since.

And my favorite red lily is in full bloom! This is probably my favorite of all the plants we have out in the garden. I think the color on it is simply spectacular.

If you’re wondering if I’m still doing the bicycle thing or if I’ve turned even more lazy than I usually am, yes, I’m still at it. I try getting out every day. I admit that’s been a challenge with the weather the way it has been. I’ve been reluctant to go very far out of town because of the way the rain seems to pop up out of nowhere some days. Because of that I’ve only been out on the trail a few times so far this year. Hopefully we’ll get a change in this weather pattern in the near future.

Let’s see, what else… I haven’t had time to play with radio very much so I still don’t have the new Yaesu up and running with digital. The “new” Lenovo laptop I picked up for $300 that it’s going to be hooked to looks like a real gem so far. It isn’t blindingly fast, but it’s certainly got way more horsepower than it will ever need for the application it’s going to be used for.

We don’t have any other major projects in mind for the gardens and landscaping this season. The next project is to finally tackle moving all my radio and computer equipment down into the basement. I’ve been putting that one off way, way too long already and I really need to get working on that. 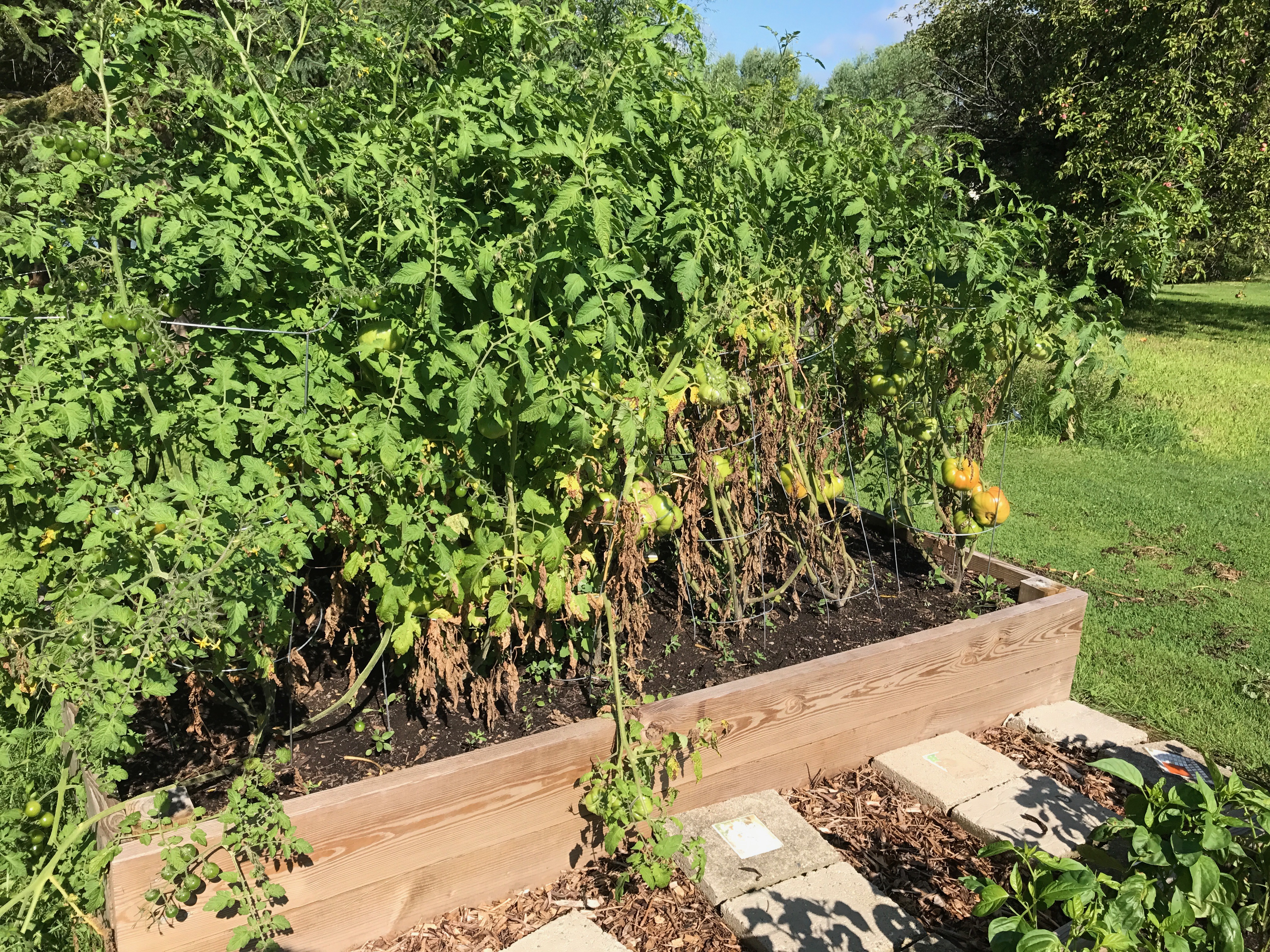 We messed up with the tomatoes this year. It’s partly our own fault, partly the fault of the weather this year. They’ve developed a kind of fungus that’s slowly working it’s way up the plant from the bottom, taking out the leaves. Not exactly pretty. We’re getting fruit, but we won’t get anywhere near as much as we should because of it.

Tomatoes can be a bit fragile. Depending on which variety you plant, there are all sorts of diseases the plants can get. In this case a combination of factors, the overly wet weather we’ve had this summer along with our planting the tomatoes way too close together, created an environment that permitted fungus to develop and thrive in the damp, warm conditions.

This is at least partly our own fault. We badly overcrowded the plants. There are twice as many in there as there really should be. Spreading the plants out more would certainly have helped. And there are commercial fungicides that can help with this.

We’ve been talking about putting in two more raised beds this size and perhaps this will finally get me to stop procrastinating and actually do it. We definitely need more space if we’re going to keep growing this many tomatoes. 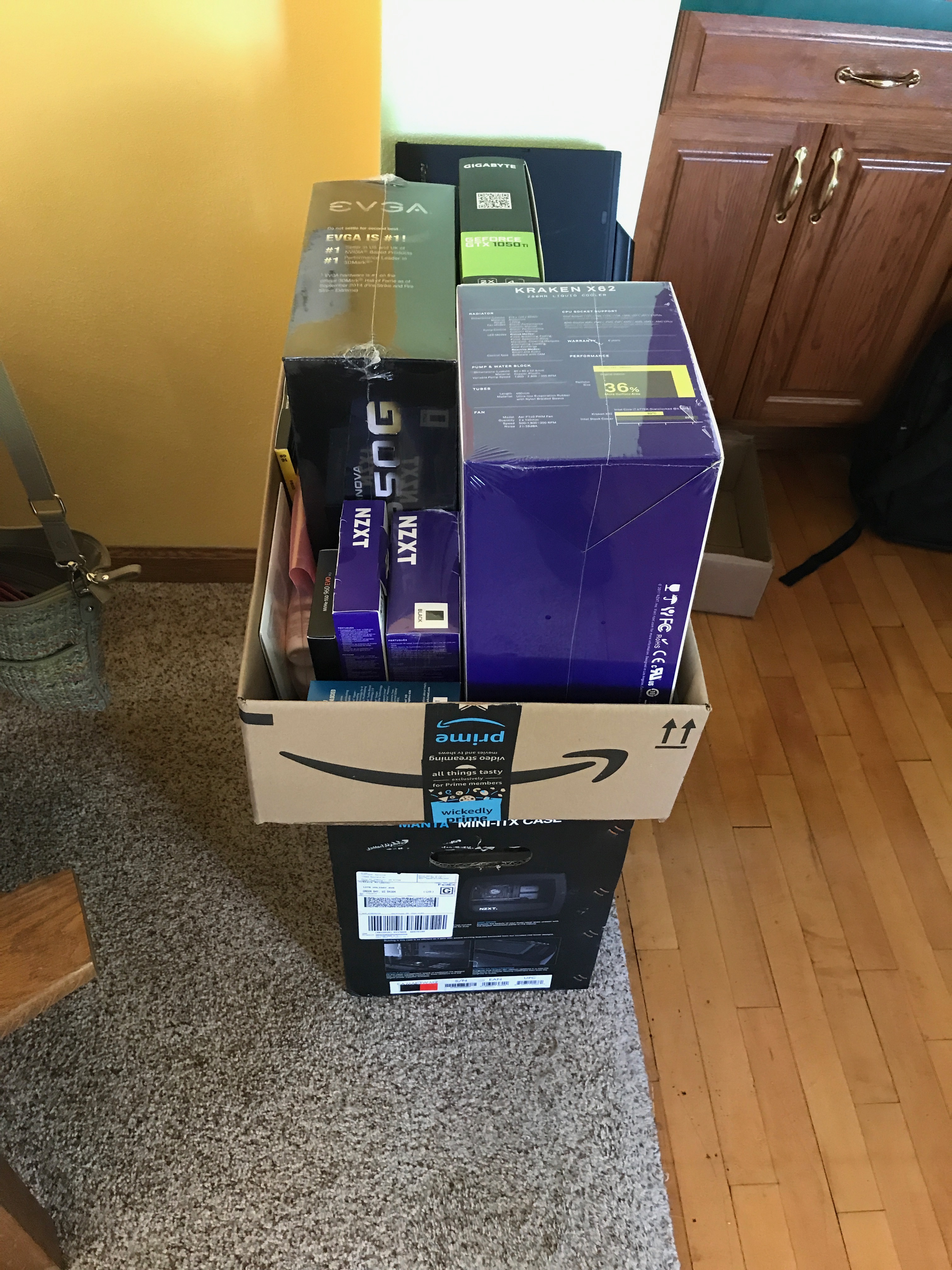 Computer stuff: My gaming computer, a really really nice Razor Blade laptop, decided it didn’t like me any more, got so hot the case burned my hands, and then died. I suspect the graphics card went bad, but we’re not really sure. In any case, it’s well outside of the warranty period and would probably cost more than the computer is worth to try to get it fixed. And it was pointed out to me that I could build a computer with much better specs than any gaming laptop had, for half the cost, if I went with a desktop system. So Saturday we were sitting here looking at the box full of stuff you see there on the left.

Now the last computer I built with my own hands was a 486, so that ought to give you some idea how long it’s been. I could probably have put one together myself, but Eldest Son builds this kind of stuff all the time so I let him spec out the system, select the parts and actually put the thing together. ES figures that if anything is worth doing, it’s worth doing not only to excess, but ridiculously over the top. So what 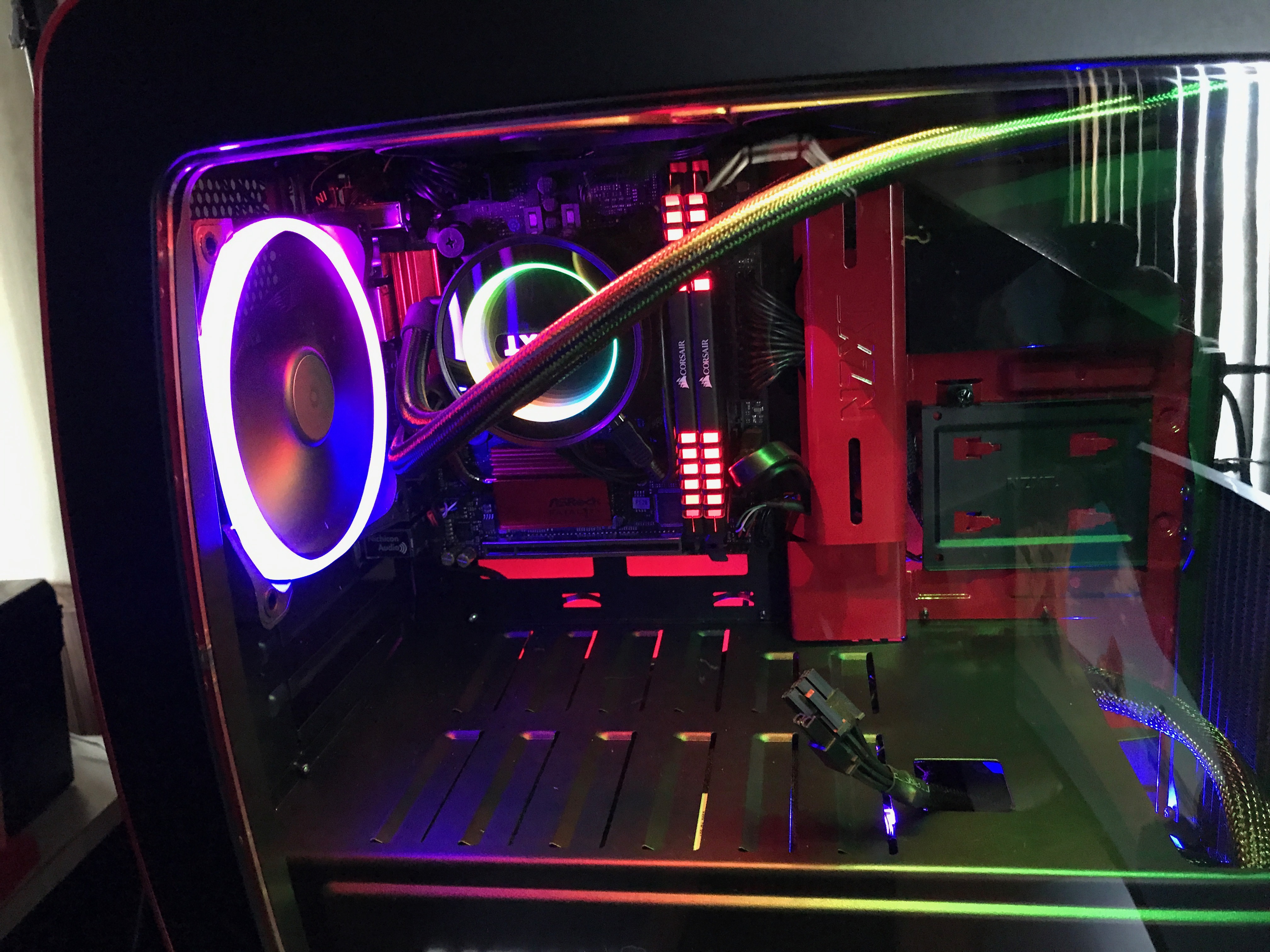 I ended up with is this over on the right.

What we ended up with was a transparent case to show off all the fancy bits inside, and enough strobing, glowing, swirling interior lighting to put a 1970s disco to shame. All it needs is a spinning disco mirror ball hanging inside to complete the look. Sheesh…

Of course absolutely none of that has anything to do with how it actually works as a computer. So, how does it work as an actual computer? Holy s**t it’s fast! The latest Core i7 processor clocked at 4.7 Ghz, high speed Samsung SSD, threaded this and hyper that. The thing has a liquid cooling system and 8 (???) fans, 8 USB3 ports, 3 Thunderbolt ports.

And I have absolutely no idea how well it works for gaming because the video card was DOA.

Sigh… We suspect it was damaged in transit because it looks like one of the shields on the card was pushed into one of the circuit boards, so ES took it off to get a replacement. It runs, but only using the motherboard’s built in Intel video.

The interesting thing is that it seems no one has Nvidia graphics cards. It took ES almost two weeks to get this one in, and a quick browse around Amazon indicates that pretty much no one has them in stock right now. Every single listing for the Nvidia 1050 or 1080 card shows “Not available until August 10”. What’s going on? I have no idea.

So until we can get the Nvidia card replace, I won’t really know how well it will work as an actual gaming machine.

Oh, I also switched off almost all of the interior lights on the thing. It looks really neat. For about 30 seconds, then the strobing and swirling and lighting effects become seriously annoying.