The weather has been amazingly pleasant for a change these last few days. Everything is growing like crazy as you can see from the photo of the hosta garden in front of the house that I took yesterday. Wonderful plants, hostas; decorative, resilient, with so many different shapes and types it’s hard to keep track. 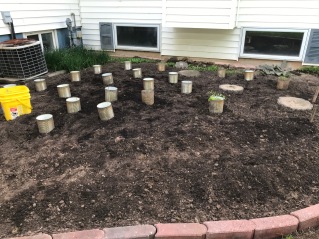 The corner garden here has been completely redone. In the past it was mostly herbs and decorative plants, but this year we more than doubled it in size, hauled in a tons of compost (well, my aching back claimed it was tons) and it’s being switched to mostly vegetables this year. MrsGF put in something like 20+ pepper plants of varying types (can you tell we like peppers?) plus two blueberry bushes and a couple of rows of beans down along the front. The soil in there is so utterly horrible that I did something I very rarely do, I raked in some commercial fertilizer as well. We’ll see what happens. It will either be wildly successful or everything will die off.

We were not going to make the same mistake we did last year by crowding too many plants into the two raised beds. It’s very tempting when putting in seedlings to crowd them in because it seems like there is so much wasted space, and forgetting just how big those plants get when they’re mature. We only put 6 plants in each of the beds this year and I hope that will help to eliminate some of the issues we had last year. While we avoided the dreaded blossom end rot last year, we did have some fungus problems because the plants were so crowded together.

And then when I was walking around the yard yesterday I nearly stepped on this guy. Yes, we have snakes in Wisconsin. You wouldn’t think they could survive our winters up here, but several species do quite well. Heck, until the 1950s or 60s we still had timber rattlers around here. This little guy… Little? Ha, he was a good two and a half feet long. He scared the heck out of me although I’m sure nearly being stepped on while he was sunning himself in the grass scared him more. 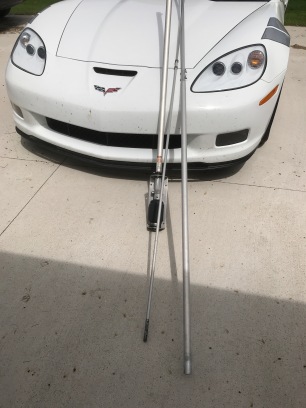 After the fiasco of wrecking the fold down mount for the GAP antenna, I put the crappy old Comet 250 vertical back up, hooked up the coax, went inside, checked to make sure everything looked OK, turned on the transceiver and — and immediately made about 6 different contacts all over North America with the thing on 40, 30 and 20 meters, running about 40 watts of power, less than it takes to run a modern lightbulb.

I’ve been getting more and more interested in QRP operations. That’s amateur radio slang for very low power. QRP operators put out 5 watts of power or less. Often a lot less. The guys who are really good at it often operated with less than one watt of radiated power. They often use transceivers they built themselves or got as kits that can be ridiculously inexpensive.

There is a ‘gotcha’, though. Trying to make contacts using voice at those low power levels is damn near impossible. If you’re going to run QRP, you really need to go with good old morse code, or CW as it’s called.

Now I’ve thrown myself at CW on numerous occasions over the years, and failed miserably in learning it. The recommended techniques, the tapes, the CDs, none of them have worked. It all sounds like pure noise to my ear.

But then I ran into an IOS app called “Ham Morse”. It does have the more traditional teaching method, which doesn’t work for me. But what does work is that Ham Morse can also tie into the headline news feeds of various news organizations and sends the as CW at whatever speed you’re comfortable with. And guess what? For me, at least, this works. Now that I’m trying to copy actual meaningful text instead of single letters or groups of letters that have no relationship, my weird brain is actually starting to make the connection between those strange noises and the text.

The result is that I can copy CW at up to about 6 – 8 words per minutes. Maybe. Sometimes. Sort of. I’ve been listening to a lot of CW down on 20 meters trying to make sense of it all and despite all of the odd abbreviations and symbols and prosigns they use, I’m starting to pick some of it up.

Anyway, one of the reasons I’m interested in QRP is that the equipment is small, the antennas are small, you can operate with nothing but a relatively small battery. The whole kit can be thrown into a backpack easily, set up and taken down quickly. It’s ideal for someone who spends a lot of time on a bicycle like me. Would be great fun to sit out on the trails making contacts on summer mornings with just a wire hanging in a tree and a couple of watts of power.

I don’t make a lot of recommendations for websites or products or stuff like that, but if you’re at all interested in QRP operations, battery technology, solar power technologies and amateur radio, click the link up there at offgridham.com. Chris over there has provided a wonderful resource. He delves into alternative power technologies like solar, evaluates and discusses battery charging systems, battery types, etc. While it’s oriented for amateur radio, the material he covers is going to be of interest to anyone who is interested in unplugging from the power grid.

And that’s all for now.

Oh, I keep forgetting. I have email here. If you have questions or stuff you don’t want to put in the comments, you can reach me at old.grouchyfarmer@gmail.com

2 thoughts on “Amateur Radio & Gardening, Hey, Why Not”