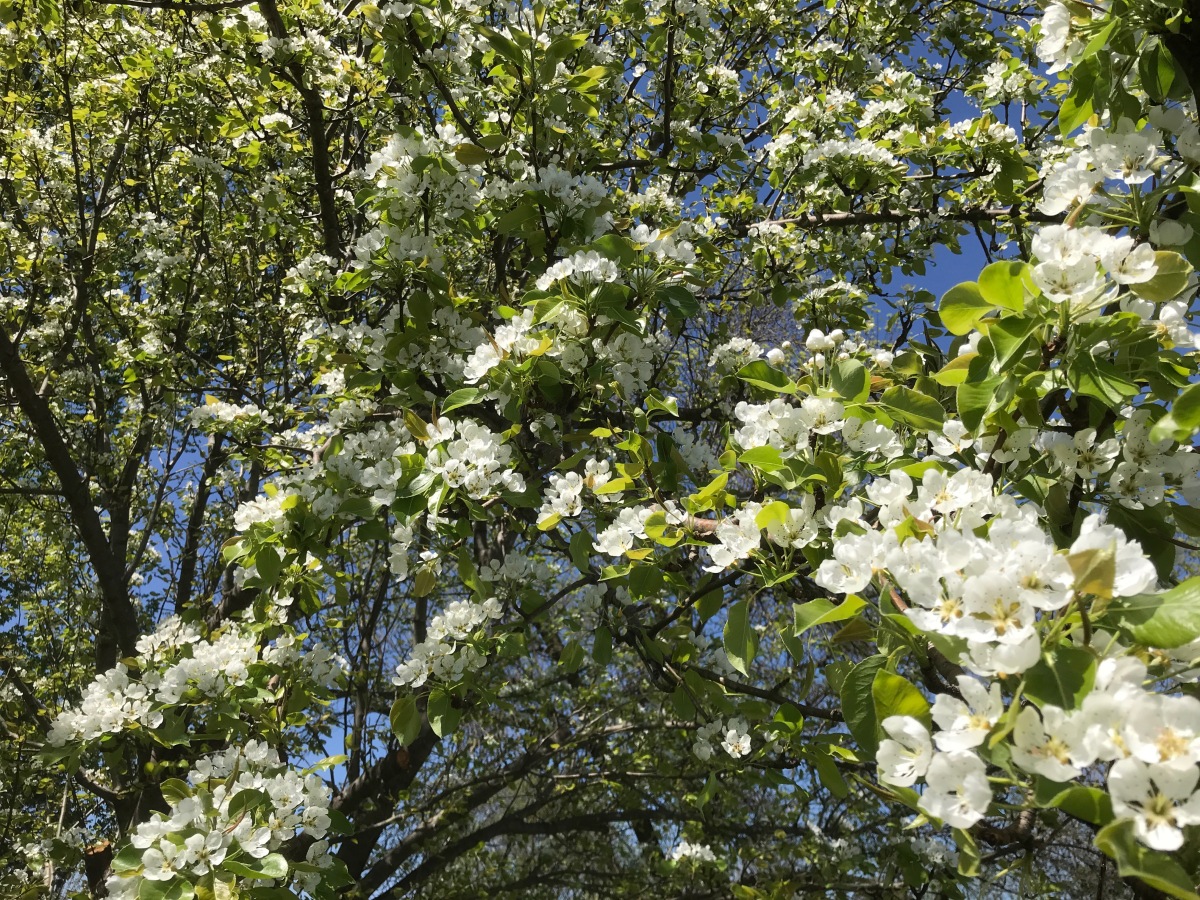 Everyone around here is playing catch-up now that we’ve had some nice weather following the April blizzard and heavy rains. Local farmers have finally been able to get into the fields, some of which were literally underwater just a couple of weeks ago. Everyone is scrambling to get their crops in because more rain is predicted for Monday and Tuesday.

I don’t have to worry about getting in acres and acres of corn and beans of course. Being retired has it’s perks. All I have to worry about now are my gardens here at the house. But the sight of the pear tree in full bloom outside reminds me that it’s high time we got stuff planted and we’ve been working at expanding some of the gardens and prepping the beds we already have. I spent almost a half a day hauling compost from the town compost site and working it into the various gardens around the yard. Spent another half day digging up sod to expand the corner garden where we used to grow mostly herbs. It’s one of the few spots we have here that gets full sun and one of the few options we have for adding new spots for growing stuff that needs day-long sunlight in-ground rather than in raised beds or pots.

Getting rid of sod is a royal pain in the neck, and the soil left behind isn’t exactly a good growing medium. The dirt under the sod was rock hard. I went over it at least 6 times with the tiller, getting deeper every time. Then I covered the whole area six inches deep with compost and went over that three more times to work it in.

We took the seedlings out of the house where MrsGF had started them and they’re out now “hardening off” as they call it in preparation for planting. Mostly tomatoes and peppers of various types, and some cucumbers. The squash turned out well last year so MrsGF is going to put a half dozen squash plants in as well this year. And as an experiment she planted some old corn seed she found. We have no idea how old it really is so whether it germinates or not is going to be interesting. I suspect most of it will. But its in a rather shady area so I don’t anticipate we’ll get much from it.

One big change from last spring is that this year I’ve been seeing a lot of pollinators. I haven’t seen many honey bees, but I have been seeing bumble bees and native bees. (Note: The standard honey bee you see isn’t native to North America. It’s a European import.)

Speaking of bees, it was a rough year for honey bees. A lot of bee keepers are reporting they lost most if not all of their bees over the winter. My brother-in-law started keeping bees a year ago and he lost all of his and had to buy replacements.

If the weather cooperates this weekend we’ll be out planting in the gardens.

One thing I have to do is figure out how to keep the rabbits out. They’ve been a huge pest, and the situation has been getting worse. They’re brave little buggers, too. You’ll see them out grazing on lawns and gardens even in mid-day all over town.

Several people have suggested I sit out at night with my bow and some target arrows or an airgun, and when I take care of the local population come over and help them out. And while it’s tempting I have no desire to end up in the local lock-up. Discharging even an airgun or a bow inside of city limits is illegal. So that means I have to come up with some kind of fencing. We used chicken wire the last couple of years and it worked, but it’s ugly, hard to work with and a pain in the neck, so I’m looking into different options this year. We’ll see what we can come up with.