Egads, it’s been a while since I did anything here. When things get a bit busy I’m afraid the first thing to suffer is this blog. So let’s take a look at what’s been going on. It’s going to be a mixed bag this time, covering a variety of different topics. Let’s look at some agricultural stuff first.

The dicamba saga continues. Monsanto’s lawsuit against the state of Alabama over its very strict regulations concerning the use of dicamba was thrown out of court. Alabama put very stringent restrictions in place on the use of the product after thousands and thousands of acres of crops were damaged by the herbicide drifting.

The case was thrown out on a legal technicality, it seems. Apparently Alabama has a “sovereign immunity” clause in it’s constitution that prevents it from being sued for things like this. So nothing has really been settled.

There are new federal regulations in place now, new training requirements and other things, so I guess we’ll see if those will be sufficient to keep the herbicide under control.

The negotiations were already contentious, adversarial and often completely unrealistic, and both Canada and Mexico have made comments that they were considering pulling out of NAFTA entirely if the tone of the negotiations didn’t change. The threat of tariffs has made the situation even worse. The Canadians have become far more outspoken now, openly talking about “responsive measures”, i.e. political speak for levying such huge tariffs on US made goods that US manufacturers and agribusinesses will be unable to sell products in Canada. Mexico has been a bit less open about it, saying that the country is “considering all of its options”.

If you look past NAFTA and look at what’s happening elsewhere, the response to the administration’s tariff threats has been even more forceful, with some countries threatening reciprocal tariffs that would make US goods unmarketable. And as for China, well, if we lose China as a market, that’s pretty much going to destroy the ag economy, and decimate a lot of other businesses as well.

Weather — The weather here in Wisconsin used to be pretty reliable. We could depend on blistering hot summers and cold, snowy winters that would rival anything seen in the arctic.

Yeah, well, about that whole snow and cold thing… Although we had a period of intense cold over Christmas and New Years, it’s actually been ridiculously warm here. We had a February with temps at or above freezing more often than not, and some days when it was pushing 50 degrees. In February. In Wisconsin??? WTF? Really? After a couple of days of 45+ temps, it cooled down and we got about an inch of snow, not enough to bother shoveling because it almost immediately melted off again, and now, on March 3, we’re looking at temps back up in the high 40s and low 50s again.

I’ve been hearing rumors now that the snowmobile clubs in the area are seriously considering not bothering to lay out trails any more and may even be closing down because we haven’t had any actual snow for years now. The trails never opened this year. If they opened at all last year it was only for a few days and in limited areas.

And while we still complain about the cold (we love complaining up here in Wisconsin, it’s the state hobby, I think), and we do get some intense cold periods, all things considered it hasn’t really been all that cold either. If you look at the ice data that shows how long the lakes here are ice covered, you’ll find that the number of days, on average, that lakes are ice covered has dwindled by several weeks. 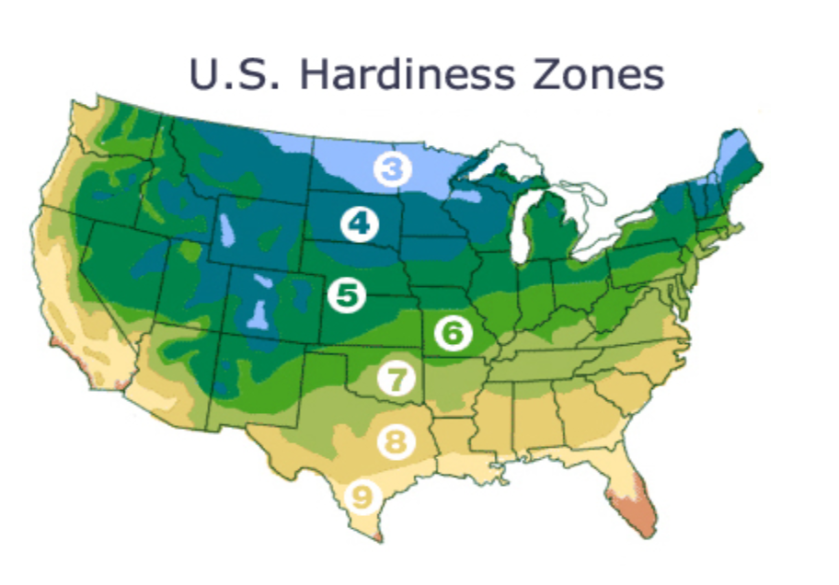 And if you look at the growing zone map, where I live about 20 miles south of Green Bay, well, we used to be firmly in Zone 4. We’re now in zone 5 and I keep hearing from people that a lot of years now we’re actually pushing zone 6.

Speaking of gardening — MrsGF and I are getting impatient. We’ve already been talking about expanding the garden area on the south side of the house and trying to figure out an easy way to get rid of sod.

One of the things that’s been pushing us into impatience is that whenever we go down in the basement we walk past the famous “Bag ‘O Seeds” that eldest son gave us for Christmas. It’s hard to tell how many are in there from this photo. That pile of seed packets is about a foot deep. He literally got us one of everything that the retail chain he works for sells in their garden department.

We really need to sit down and do some planning because there is no way that we are going to be able to plant more than a fraction of the different seeds we have.

I can tell MrsGF has gotten impatient because yesterday she got some pots and some potting soil and put in some daffodil bulbs and I suspect those will end up in front of some of the windows in the house and she was wondering if it was really still too early to start some seeds for the garden.

Amateur Radio Stuff — I’m still playing with the FT8 mode and I can see how it can be addicting. I know that some people have complained that it isn’t really “communicating”. The typical FT8 exchange consists of call signs, grid square, signal strength report, and then bye-bye. FT8 is pretty much completely useless for exchanging any kind of genuinely useful communications. So what’s the point of it?

A lot of AROs are interested in things like trying to contact 100 different countries or more, contacting every state in the US, or things like that. It’s making the contact that is important to them. Actually talking to someone? Not so much. They’re chasing awards or certificates of accomplishment or competing in contests, or doing it just for the personal satisfaction of having done it. For those people, FT8 is great. I worked something like 27 different countries in just a few hours while I’ve been experimenting with it. I’ve worked countries I never thought I’d ever successfully contact. I worked a station in Japan the other day and yesterday I got the Cayman Islands.

The fun thing about FT8 is that you can do all that stuff with very modest equipment. You don’t need transceivers that cost $10,000 and huge amplifiers and ten acres of antennas. You can do this running less power than it takes to run the average light bulb and little more than a wire hanging in a tree for an antenna.

But it does have “issues”, as they say. One of the biggest problems is that it is being crippled by its own success. It’s become so wildly popular that the small parts of the radio frequency spectrum that are recommended for its use are ridiculously overcrowded.

And it’s about to get much, much worse because the wonderfully skilled and creative programmers who developed the WSJT software most people use for FT8 is bring out a “Dxpedition” version of the software that will permit as many as 500 contacts per hour and will transmit up to five signals at the same time.

Now, the developers have stated that this new system is “suitable for use only by Dxpedition stations and those attempting to work them”, and that it should not be used on the normal FT8 bands. But you can be sure there are going to be people who are going to completely ignore that. If we get a significant number of operators running the Dxpedition version of the software in the normal FT8 bands, well, the situation is going to go from merely ridiculous to utterly insane.

I saw a statistic the other day that claimed that more than half of all contacts being made now are done by FT8, and considering the amount of activity I’m seeing I suspect that’s probably correct. I wonder if this is just a fad though and if in a fairly short time FT8 will end up abandoned by everyone except the DX hunters.

Where Has PSK gone? — One of the side effects of the widespread adoption of FT8 is that it seems to have almost completely killed off the use of the PSK mode. PSK was a fairly popular mode of communication. When I first started using PSK I would find dozens of contacts and conversations going on on the PSK sub-bands. But now? I generally fire up FLDIGI a couple of times a day when I have the time and check the PSK bands and, well, I’m seeing nothing. I mean nothing. I haven’t seen a single PSK signal out there in days now. It’s almost as if every PSK user out there immediately jumped ship for the FT8 mode and hasn’t gone back. That’s a bit disappointing because PSK is a great low power, weak signal mode, and is, or can be, as automated as FT8 is. When using PSK64 and properly set up macros, making a contact can be as quick and easy as with FT8. And the big plus is that PSK can be used to actually communicate with people.

There, I think I’ve bored you long enough for this time…