I’ve been procrastinating terribly with a lot of projects around here because, well, because summer! I’m sorry, but when the weather is reasonably nice outside I want to be outside doing stuff; puttering in the garden, biking around the back roads, walking

around town, taking pictures of flowers and plants and trees and birds and… Well you get the idea. So indoor projects and hobbies take a backseat to outdoor stuff this time of year. When the temperature starts dipping below freezing and the snow begins to fly, that’s the time to work on those indoor projects. Maybe. 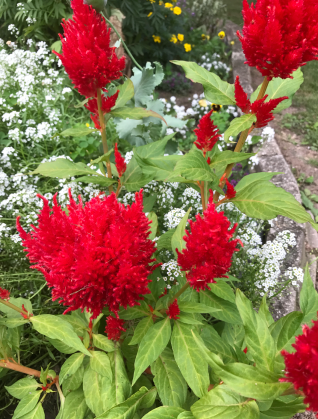 Speaking of flowers, I really, really wish I’d put in more of these guys. We only have two or three of these and they are absolutely amazing. The brilliant red color, the shape. They just shot up through the white alyssum with that amazing contrasting red. Make note to self to put in more of these next year.

We finally admitted that we planted a lot of stuff way too close together in the vegetable gardens and did some serious weeding out of the pepper plants last weekend. This wasn’t much of a sacrifice because we just pulled out all of the “cherry bomb” hot pepper plants which were just nasty. I suspected they were going to be a bust when I brought one in, cut it in half, and almost immediately my eyes began burning. I like a bit of heat, but these things? I gave one to my neighbor who loves really hot peppers, he took a bite, and about five minutes later put down a half gallon of milk to try to stop the burning. 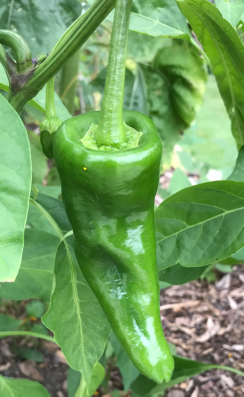 So out they went. And it’s resulted in an almost immediate improvement in the other peppers we had planted in there.

The poblanos and banana peppers began looking much healthier and started to set a lot more fruit as soon as we thinned things out.

I don’t know why we can’t learn this lesson. Every year we end up crowding things too close together in the beds, and at the end of every season we promise ourselves we won’t do it again. But the following spring there we are crowding things in again.

We really like the poblanos (ancho) peppers and the banana peppers. MrsGF and I both think they have far more flavor than the more common sweet bell peppers that are more commonly grown around here. But we did put in a few bell peppers as well and they seem to do be doing pretty good. We were a bit worried about them for a while there. The plants looked good but they were late in putting out blossoms and setting fruit, but now they seem to be making up for lost time.

We’d never grown squash here before, and since we love acorn and butternut squash, we put some in just to see what would happen and this is what we ended up with. 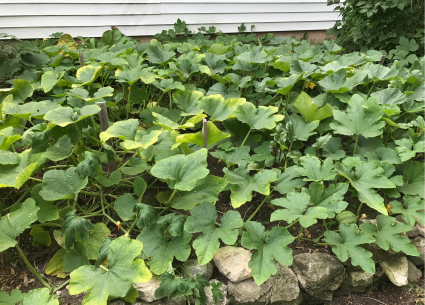 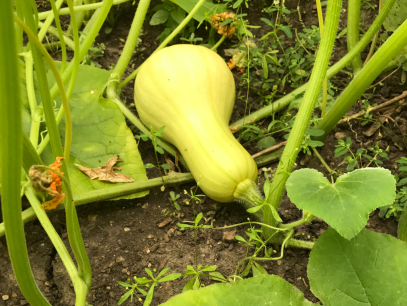 That’s only four plants in there, and they’ve taken over that whole garden on the west side of the garage. Loaded with squash now. I don’t know how they grow that fast. The other day I mowed the lawn near there, and the following afternoon there were vines running three feet out onto the grass. How does a plant grow that fast?

Some are just starting to come ripe. We had one of the acorn squash last night. Just cut it in half, scoop out the seeds, put some butter and brown sugar in the empty seed cavity and bake until tender. Then just scoop out of the skin and eat. 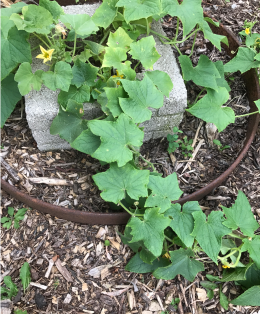 The cucumbers have been disappointing. I’m the only one who eats fresh cucumbers around here, so I only put in two or three plants and that usually gives me enough to satisfy my craving for fresh cukes, plus a few extra to make refrigerator pickles or something. But this year they haven’t been doing all that well. The plants themselves are doing just fine, they’re putting out flowers, but actual cucumbers? Not so much. I think I’ve gotten maybe six cucumbers off three plants so far this year.

MrsGF thinks it’s because we’ve seen so few bees around this summer. I hadn’t noticed it until she mentioned it, but she’s right. Aside from a few bumble bees, I haven’t really seen any. I haven’t seen any honey bees at all. Usually this time of year we have a many different types of bees busily working away at the flowers. I have yet to see a single honey bee here this year. That’s very troubling. 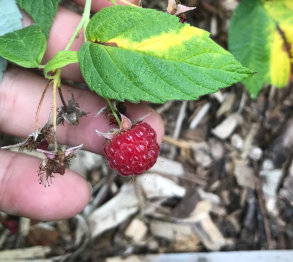 Then I ran into this yesterday. A single, lone raspberry. We only have a dozen or so raspberry plants tucked away in a corner of the garden behind the garage. I love raspberries but I’m not supposed to eat them because of the seeds. Still, it’s interesting how none of the berries ever seem to make it into the house. They seem to mysteriously vanish before they get in the door. Funny how that happens, isn’t it?

The raspberries were done producing fruit long, long ago, so I was surprised to see this lone berry out there when I was puttering in the garden yesterday. I’m surprised the birds didn’t get it. 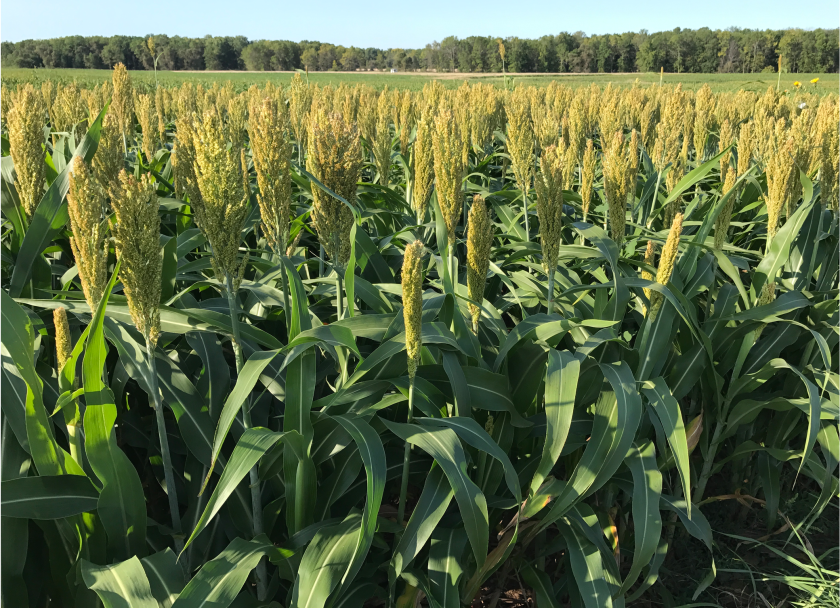 Getting out of the garden and into the countryside, some people around here are wondering what in the world this stuff is. Fields of this have been popping up around here for the last couple of years now. It sort of looks like badly stunted corn, no more than three or four feet tall. It isn’t corn, though, it’s sorghum, or milo, and it’s being grown for Kaytee, the bird seed company. Their headquarters is in Chilton, about six miles from here. When I was a kid it used to be fairly common. It was grown as cattle feed or to make syrup. Looks like they have a pretty good crop of it this year.

Let’s see — The Old Timers are claiming we’re going to have a really, really nasty winter based on the proverbial “signs”. They’re also claiming winter is going to come early as well.

The “signs” — ah, yes, the signs… I’m told the Old Timers can predict the weather based on the signs provided by nature, if only we were smart enough to interpret them. Things like the width of the band on fuzzy caterpillars, how and when birds flock together in the fall, how fat the bears are (well, not that any of them have ever actually seen a bear because they’re sitting down in the restaurant lingering for hours while nursing a cup of coffee while the waitstaff go crazy because they’re taking up a seat that a paying customer could be sitting in), maple trees starting to turn color early, that kind of thing.

Exactly how these mechanisms work is something they never explain, of course. I would be very interested in knowing how a caterpillar knows we’re going to have three weeks of -20 temperatures in January, or the geese know that we’re going to have a blizzard right after Christmas so they’re flocking up in August so — so they can what, exactly? Why would the geese even care? They’re not here when it happens so a blizzard in January isn’t exactly something they care about in the first place.

Of course the Old Timers don’t care about accuracy. By the time winter comes, anything they said will be long forgotten. Unless, of course, they hit a home run and actually manage to predict something, in which case they will remember and make sure you do too. It’s harmless and they get a kick out of it, so I just sit there and nod. 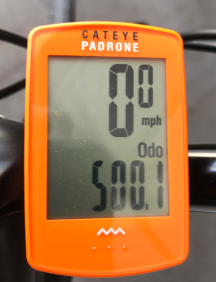 Let’s see, anything else? Oh, almost forgot. I hit 500 miles on the bike last week. When I turned up with a new bicycle on the back of the truck everyone was thinking yeah, right, he’ll ride it once or twice and it’ll end up hanging on the wall gathering dust until he drops dead and then we’ll have to sell the damned thing at the estate sale. If I keep up my current pace and the weather cooperates I should hit 1,000 before winter shuts things down.

And that is about it.

2 thoughts on “Catching Up With Stuff”