The eclipse was a bust for us. We were up on Washington Island on Monday and not only was it very cloudy, it didn’t get all that dark, either. MrsGF caught a glimpse of the very end of it but that was it.

We were on the island to visit a lavender farm up there, Fragrant Isle. If you want to know more about them here’s a link to their website. Interesting place and it is indeed, well fragrant.

My experiences with growing lavender myself have been disappointing. I’ve tried a couple of times with poor results. Wrong type of soil here, I’m told. Of course I didn’t try very hard because I don’t really like it all that much. I don’t think it’s a very good looking plant, and to be perfectly honest, I hate the smell of the stuff. But everyone is like “Ooooo – Lavender!!” so I just stand in 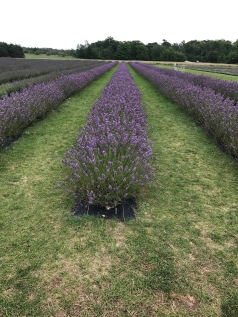 the background and try not to inhale and let them enjoy themselves.

Anyway, I like Washington Island. I don’t get up there as often as I’d like because it’s about a two and a half hour drive from here, plus a ferry ride, so about the only time I can get up there is if I have at least an entire day and can get on the road by 6 AM, or can spend the night up there. It’s an interesting place. It has a permanent year around population of about 750 people or so, it’s own K-12 school system, own power plant. Once upon a time there was a lot of farming and commercial fishing going on up there and it was a fairly thriving little community, but commercial fishing has fallen off to almost nothing, and except for a few speciality things, farming has dwindled to nothing up there as well. They mostly survive on tourism now. While it hasn’t turned into the tourism insanity that’s struck (and pretty much ruined) Door County, that kind of thing has been sneaking in over the years.

One of my favorite spots up there is this little lake. It’s well off the beaten track, hard to find, and as a result no one goes there and it’s still unspoiled. And quite! It’s astonishingly quiet. Absolutely no noise at all. No cars, no ATVs, no jet skis, and because it’s well off the flight paths, not even any planes overhead. It’s probably one of the last really quiet spots left in the state, where you can sit for an hour and hear nothing except the frogs, crickets and birds.

Been playing around with taking panoramic photos once in a while. This is an over view of a marina north of Sturgeon Bay taken from the top of an abandoned quarry across the road.

Anyway, that’s how I spent “Eclipse Day”. No eclipse sighted, but we did have a very pleasant mini vacation.