Almost as soon as the weather got warmer the bike got pulled out of storage and I was out on it. It took me a few days to get back into it again, but it was easier than I thought it was going to be. Apparently doing the treadmill every day during the winter kept me from completely falling apart and it wasn’t long before it was comfortable to be back in the saddle and putting on more than a few miles. 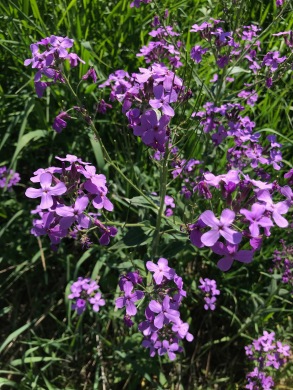 This is an amazing time of year to be out in the countryside biking around. Everything is lush and green, everything is in flower this time of year. I sometimes struggle between the temptation to keep going to put on some miles in a reasonable amount of time and the temptation to stop every few hundred feet to take photos of some neat plant or flower as I rid around the backroads.

I wish the trail in the lead photo up there was a bit closer, though. The start of the trail is about four miles from town, but once you get on it, it runs for more than 30 miles all the way to Green Bay, with branches leading off into towns like Brillion.

This year I’m trying an app for my phone called aprs.fi. It uses the phone to tie into the APRS system. Automatic Packet Reporting system. It uses the phone to send and receive little bits of data back and forth to a network. It’s been used by amateur radio operators for many years now to send information, and one of its uses is position tracking. A lot of VHF/UHF transceivers have APRS capabilities built into them, and some transceivers have GPS built into them as well. They can be set up to periodically transmit the position of the radio to permit it to be tracked by others using the system.

MrsGf has a similar program for her iPhone plus the FTM-400DR transceiver in her car has APRS and GPS capabilities. The local ARES group she belongs to is just now looking into using APRS to track members of the group when they’re out in the field. Since APRS/GPS capable transceivers are still pretty pricy they’re looking at the APRS applications available for smart phones. Some work pretty well, others have problems, some serious. The one I use is aprs.fi and it seems well above average in it’s utility and capabilities. When the group was out doing volunteer communications for the Elkhart Lake Triathlon over the weekend a couple of people were using using some of the apps and I was able to track their positions in near real-time on a map.

I had it running when I was out on the bike Saturday and used it to plot my course when I did about 11 miles that morning. You can see the plot in the screen capture.

The question is why would I want to do this? Well, I’m out on the bike, on backroads or trails, and you never know what happens. Accidents, health issues, any number of things could happen that would incapacitate me. Yes, they can use the cell phone to try to find me, but trying to find the exact location of a cell phone is an iffy thing and often very inaccurate. The APRS app uses the phone’s GPS system so it’s much more accurate than trying to use the cell phone system to do the locating.

Certainly it’s a great technology for emergency services and ARES/RACES organizations should almost certainly be looking into it as a way of tracking their operators when they’re out in the field.

Let’s see, what else… The gardens are doing well. We’ve had to do a lot of watering. It’s been pretty dry around here over the last couple of weeks. Temperatures have been fairly cool after the heat wave we went through a few weeks ago.

They drag me into the clinic every 6 months so I spent the whole morning doing that. To make a long story short, everything checked out fine. All the numbers were where they are supposed to be. BP is still higher than it should be, but it’s no where near as bad as it was a year ago so I’m happy about that. And they’re delighted I’ve taken up biking. I think everyone was afraid that once I retired I was going to end up sitting on my butt all day in front of the radio or computer or television and it kind of surprised everyone that I started doing that last year.

The next thing I want to do is put together a low-power (QRP) transceiver that I can throw into a backpack and take out on the trail with me. I think it would be great fun to sit out in the woods or on a trail somewhere with an antenna strung up in a tree and trying to make contacts with just a couple of watts of power.

One thought on “More Stuff!”