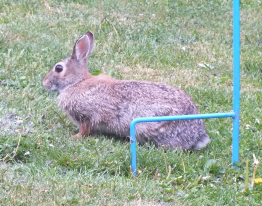 While we live in town, we live in an area with large house lots, many trees, lots of bushes and a lot of rather lush vegetation, so we have the curse of the gardener, rabbits. Last year the little buggers ate all of my red runner beans almost as soon as they sprouted. There are mornings when I get up and I’ll see a half dozen of them in our yard or in the neighbors’ yards grazing on whatever the four legged locusts can gobble down. They’re getting more and more brave, too, coming out by mid afternoon in some parts of town. One of my neighbors tried live trapping them but had no success. 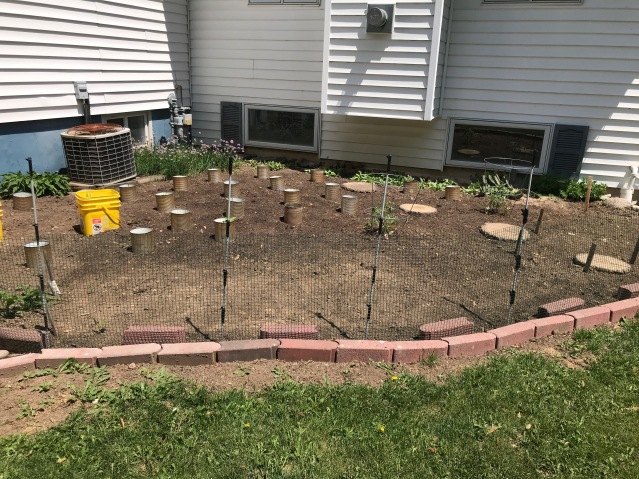 So to keep the little four legged vacuum cleaners out of our veggies we resort to fencing and one of the things MrsGF and I did over the weekend was put one up to keep them out of our produce. We got new fencing this year to replace the nasty looking chicken wire we used previously. It’s only 2 feet tall, a dark green color to make it less intrusive looking, and it’s fairly easy to put up. Hopefully it will keep the little stinkers out of our just barely sprouting beans.

Now you probably see all those #10 sized cans in there and you may not know about this trick. This is something MrsGF introduced me to years ago. When you first put seedlings out into the garden it’s something of a shock for them. They’ve just come out of a damp, warm, cozy little greenhouse and now are stuck out in the cold, cruel world and have to fend for themselves. The cans help to give them some shelter from the elements and protect them from the previously mentioned rabbits. Just get some empty #10 cans, cut the bottoms out of them, and push them about an inch into the soil around the newly transplanted seedlings. The only thing you have to remember is that when you finally pull the cans out after the plants are established is to give the can a twist before lifting it up or it can pull up large clods of earth which can disturb the roots. 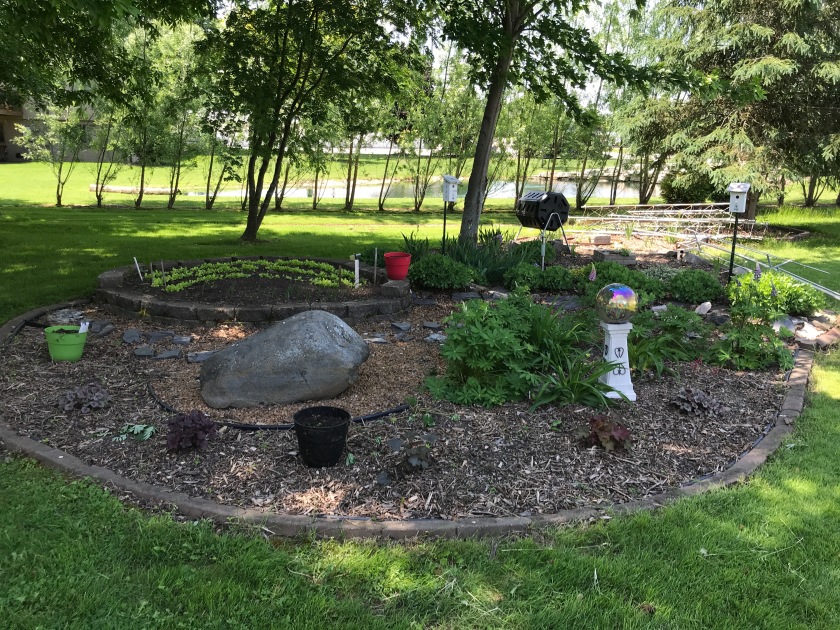 There are big changes coming for this area back here shown above. Right now it’s largely just decorative except for the lettuce bed behind the big rock. The problem back here is this area is really low and is almost underwater in the early spring, which makes it hard to grow anything except grass. That’s why we put in the raised beds which are off to the right out of sight. MrsGF and I decided this whole area is going to get raised up, perhaps yet this year if we get the time. We’re going to get decorative retaining blocks like the ones currently surrounding the lettuce bed, pull out all of the plants we want to keep, and then make the whole thing into a single raised bed about a foot above the height of the lawn.

Well, we’ll have to move the antenna parts you see off to the right before we can start anything back there. Hopefully that tower you see laying back there that has been going to be put up “real soon now” for about 5 years will get put up this year. Maybe. And the GAP Titan vertical antenna will replace the Comet vertical as soon as I can corner eldest son and guilt him into helping.

The antenna tower… I traded a deep cycle marine battery for that with one of the ARES guys. He needed a battery for the power system in the emcomm trailer, he had this tower laying around that he just took down, so we made a swap. The tower was supposed to go up at the end of the garage and be the support for various antennas, including one for broadcast TV so MrsGF can watch PBS in the evening. (The problem with digital TV versus the old analog is that with the old analog if you were in a fringe reception area, you still could see and hear something. There would be static, yes, but you’d still get a watchable picture. If you’re in a fringe area with digital, you get nothing). Eldest son keeps claiming he’s going to help get it up the next time he gets over here.

Antennas are really my biggest problem when it comes to amateur radio. I play around with them, experiment, etc. but I haven’t come up with anything really any better than the off center fed dipole currently strung up from the garage to a couple of trees. It works reasonably well, but is way too low to the ground. And the biggest problem is that one leg of the dipole runs to a tree in the neighbor’s yard, and the neighbor is moving, so that means the antenna has to be moved too.

Like a lot of amateur radio operators, I’ve accumulated a lot of junk related to the hobby, including several different types of antennas. And despite claims from the manufacturers of many antennas, most of them don’t really work all that well. It’s basic physics, really. In order to be efficient, antennas for radio frequencies down in the shortwave (HF) portions of the amateur radio bands, like down in 80 or 40 meters, need to be pretty long. Your cell phone has a really, really tiny antenna, because it works with very, very high frequencies.

Antennas for the frequencies I work with are huge. We’re talking 80, 90 feet long or longer. My OCFD, if laid out straight, would be 135 feet long.

So if it needs to be that long, how can that GAP Titan antenna laying out there be only 21 feet tall? Well, it cheats, basically. It uses various tricks to make itself work better than it really should at first glance. It looks simple, but it isn’t. It’s actually a very complicated piece of equipment with various radiators and stubs and, well, antenna stuff. It would take more space than I have here to try to explain it all.

What it boils down to is you can’t get something for nothing. You can’t fool physics. You can make smaller, shorter antennas, but you sacrifice efficiency when you do that. I wince when I see some of the ads for some of the antennas on the market because I know the claims being made for the are pretty much bogus.

4 thoughts on “Rabbits, Cans and Antennas”