No, I didn’t misspell “zenn” up there. This has nothing to do with buddhism, but instead the Zenn is actually an electric car. This thing, to be specific… 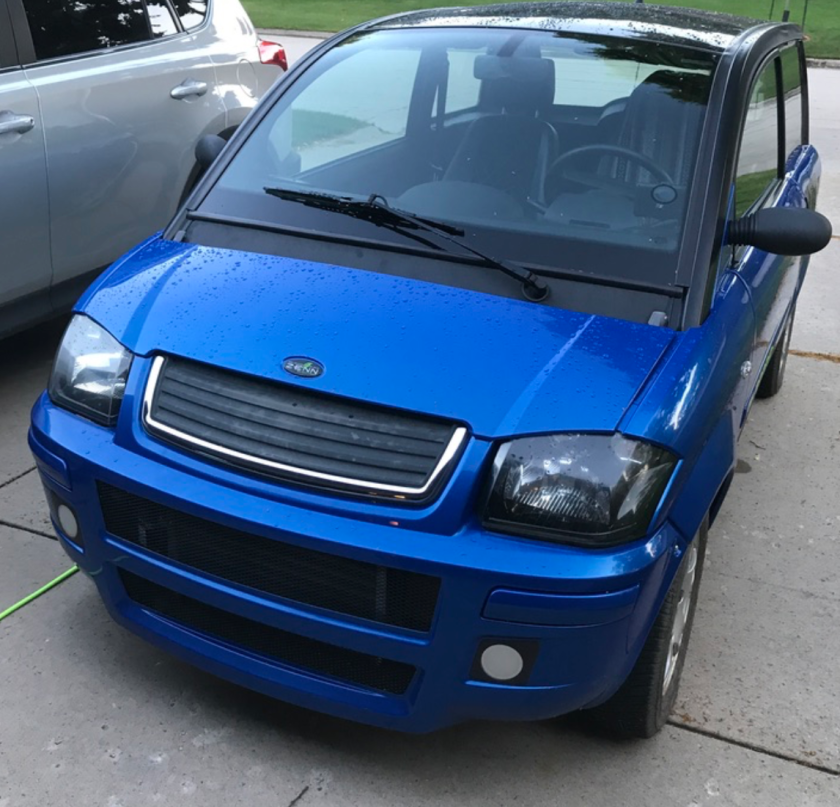 “Zenn” stands for “zero emissions no noise” and it was an attempt by a French company to produce an all electric car. And Eldest Son (ES) has one of these — these things.

It’s not really a car, it seems. Technically it’s an LSV, “Low Speed Vehicle”, a classification of vehicle that was created by the National Highway Transportation Safety Administration because they were bored or had too much to drink at lunch or something, because while LSV’s are allowed on the street, they are exempt from most of the safety standards real automobiles and trucks have to follow and these things are about as safe on the street as, oh, a tin foil and tar paper shack is in a tornado.

LSVs are restricted to a top speed of 25 mph, and can only legally travel on streets where the speed limit is 30 mph or slower. (I’m told there is a way to hack the computer on this thing to boost it’s speed up to a mind numbing 32 mph! Ooo!)

Now electric cars are getting a lot of press these days, things like the hybrids, all electrics like the sporty, high tech Tesla, the Leaf, etc. And they are fine vehicles, some of them are even outstanding vehicles.

The Zenn is not an outstanding vehicle. The body and chassis was made in France, shipped to Canada where, with the help of trained beavers, they shoveled a 30 hp electric motor into the thing. Well, okay, so they probably didn’t use trained beavers. But I do suspect moose were involved because Canadians enjoy messing with us down here.

The Zenn had a whopping 30 hp engine, it’s top speed was limited to 25 mph. You could squeeze 2 adults into it with some groceries. It ran on sealed lead acid batteries that gave a range of about 30 miles or so, less if you had a passenger or did something silly like, oh, turning on the lights or radio. Much much less if you did something even more silly like turn on the heater or air conditioning. (Note: the owner’s manual states that the car’s heater is not intended to actually, well, heat anything. It’s there only to defrost the windows.)

Still, for it’s intended purpose, which was basically driving five or eight miles to your job or running to the local grocery store to get your organic free range humanely harvested almond milk for your morning bowl of kelp flakes, it would work.

But there were a lot of problems with the Zenn. The biggest of which is that it was, well, pretty much crap.

I drove this thing yesterday, and after I stopped laughing because I couldn’t believe they actually allowed this thing on the road, I realized that it is a bloody horrible car, and the only thing that surprised me about it was that it took nine years for the company to go out of business.

The ride is — well, awful. Every expansion joint, every dip, every stone, every defect in the pavement, every pile of squirrel poo, is transmitted directly from the rock hard tires and even harder suspension directly to the base of your spine. It handles just like a golf cart, with uncertain steering, odd twitches and peculiar vibrations adding to the excitement of the experience.

And that whole “no noise” thing they talk about? Uh, well, no. Okay, standing on the sidewalk watching it go by you don’t hear anything. That’s because they’ve funneled all of the noise into the interior of the car. My Corvette with the racing exhaust and headers and the stereo cranked up is quieter inside than this thing.

Then there’s the brakes. As in what brakes… It has a regenerative braking system, they claim. When you step on the brake, it goes into regenerative mode, supposedly taking the energy of your forward momentum and magically turning it back into electricity that gets dumped into the battery and slowing you down. So you put your foot on the brake and — nothing happens. At all. Rapidly going into panic mode, you push harder, and harder and harder, and still nothing happens. Until finally you put your foot all the way to the floor and the real brakes kick in and the car comes to an abrupt halt and you find out why they put seat belts in it, to keep you from going through the windshield when you stop.

You laugh a lot when you drive this thing. You have to because it keeps you from screaming in terror.

Let’s look at some of the other high points of this car.

It’s plastic. All of it. Plastic body, plastic, well, everything. Even the glass isn’t really glass, it’s plastic. The windshield is glass, but the side windows and rear windows are plastic, and not very good plastic, either.

As noted above, the heater doesn’t actually heat. It’s just there to defrost the windows. And the air conditioner, well, it sort of works? Kinda? Maybe? If you’re willing to put up with your range dropping by at least half.

Charge time isn’t utterly horrible. They claim it will recharge the batteries to 80% in about 4 hours, with a full charge taking 8 hours.

Oh, they would have sold you a fast charger that would give you a full charge in an hour.

So, you ask, what did they sell this thing for? Five, six grand, maybe?

With the optional quick charger, this sucker would set you back $27,000. For a car with a top speed of 25 mph and a range of 30 miles, which is ridiculously uncomfortable to ride in, terrifying to drive, and which would crumple like a piece of paper if it were even bumped by a real road vehicle because it meets virtually zero highway safety standards.

Gee, I wonder why the company shut down…

ES picked this thing up for next to nothing. It needed new batteries, work on the electronics and other things. I figure he’s got about $2,000 invested in this vehicle so it isn’t like he’s stuck a fortune into it, and he’s using it every day. He commutes to work with it every day. And I have to admit that it’s cheap. He’s crunched some numbers and figures that as far as energy usage is concerned, he’d have to have a car that got at least 140 mpg to match the cost of the energy he uses with the Zenn.

And there’s another benefit as well. The sheer terror of driving this thing in traffic is better for waking you up than an espresso I.V.

4 thoughts on “Zenn and the art of electric cars”