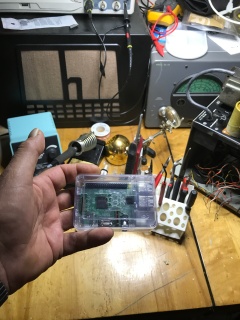 This is my new toy, a Raspberry Pi 3. If you want to experiment with building evil robotic minions to help you to take over the world, this is a good place to start. It has a 64 bit, quad core ARM A53 processor running at 1.2 GHZ, a gig of RAM, 4 USB ports, an HDMI port, LAN port, WiFi, reasonably good graphics and sound, and runs a version of LINUX. It can connect to the outside world to enable the computer to hook up to sensors, relays and controllers to make evil robots to allow you to take over the world, control devices, record data from sensors and all sorts of fun things.

And it costs a whopping $35. Less than what it would cost me to get a good meal at that fancy restaurant a couple of blocks from here. Hell, less than what just a bottle of wine would cost over there.

Now this, on the other hand… Well, not on the other hand because you couldn’t pick it up with one hand, but you get the idea. This is the first computer I ever owned. It is a Ohio Scientific C2-8P, and if you’ve

never heard of it, I don’t blame you. Ohio Scientific is just one of many, many computer makers that tried to get into the home and small business market back in the late 1970s through the mid 1980s, and failed. It did better than a lot of them did, but eventually it failed, along with Atari, Commodore, Apricot, Coleco, Exidy, Franklin, Panasonic, Radio Shack/Tandy, Sinclair, Texas Instruments… Well, the list goes on and on.

Mine wasn’t even as good as the one in the photo over there. Mine was an early version that didn’t have the fancy paint and logo on the front. And it was nasty. It was about the size of a microwave oven, packed solid with circuit boards the size of a sheet of paper, each of those stuffed with chips of various types, all hooked together with miles of ribbon cables and wiring.

Mine was kind of odd. Kind of? Ha! It was seriously odd. I’d never seen anything like it before or since. I suspect it was an experimental unit that had been heavily modified. According to the photocopied documentation I got with it, it could support three different processors, a 6502, 6800 or 8080. Or maybe a Z80. Don’t remember. It was a long time ago. They were selected via a rotary switch on the back???? Really? Seriously? I never knew for sure. There was only one CPU board in it when I got it. There was a big rotary switch on the back but it wasn’t wired to anything. I think they had some kind of scheme where the switch would select one of 3 CPU boards connected to the backplane, but since there was only one CPU board and the switching system wasn’t connected I have no idea what the hell they were trying to do.

Why 3 different CPUs? I suspect they intended to use it as some kind of development and/or testing system for different types peripherals. The documentation I had was originally typewritten, with hand written notes in the margins, and then had been photocopied. It was interesting, that’s for sure. Large parts of the machine were wire wrapped and hand soldered so someone had been in there fiddling around. A lot.

Data storage was on a cassette tape. It read/wrote data to a cassette tape at a whopping 300 baud using the Kansas City Standard (if you know what that is, you really, really need to get out more and get a life). That’s 300 bits per second… Oooo, the excitement! To load the editor/assembler program so I could program in assembly language took 20 minutes. Video was black and white, text only, going to an old Panasonic B&W TV set that I had to re-wire to handle the video input from the computer. The company I bought it from offered to give me a “real deal” on the matching 8 inch floppy drive system for it. I passed because I could have bought a pretty good car for what they wanted for the thing.

What did it all cost? By the time I got it up and working (sort of) I probably had well over a grand invested in the thing.

In a way it was completely worthless, that computer. I never actually did anything genuinely useful with it. But on the other hand, if you count the intangibles it was worth every penny because I taught myself programming in BASIC and assembly language on that beastie. I learned how to solder IC chips to circuit boards. I learned how to hunt down failed components (capacitors failed all over the place on that thing for some reason). I learned why storing data on cassette tape is very, very nasty. Trying to get that thing running and keeping it running taught me more about the technology than all the computer science classes I took in college.

And I learned how to make my own Faraday cage because it put out so much RFI it screwed up every TV and AM radio in the area when I turned it on and had build one around it just so I could use it.

Now, where was I? How did I get off on this? Sheesh, I was going to talk about changes in technology, make pithy remarks about how almost no one back then foresaw how computer technology would evolve, morph into what it is today where computers are literally everywhere, in every aspect of our lives.

Instead I end up doing this ramble down memory lane babbling about a relatively minor player in the early computer market… Sigh.

Damn, I hated that computer. Wish I still had it.