What sparked this piece is that the DNR here in the state is being sued by a couple of different dairy organizations over the new rules it and the state legislature instituted to try to deal with the massive problem of pollution caused by runoff from the manure generated by the CAFOs (concentrated animal feeding operations, or mega-farms as they’re generically called).

Manure disposal is a huge problem here in Wisconsin and in other states where there are any kind of large scale cattle operations. Forty or fifty years ago when farms here in the state were still relatively small, it wasn’t a big deal. But now, when we have farms with 3,000, 5,000 or even more cattle concentrated on a single farm, confined to a small area, it has become problem which is literally toxic. Just one of these farms generates as much sewage as a small city. And dealing with that much manure safely is not easy.

And we’ve learned that the hard way. Private wells all over the state are contaminated by the runoff. Some have been hit hard. Kewaunee County has at least 30% of it’s private wells contaminated. Some estimates I’ve read put that number as high as 45%. Some organizations and schools have been giving out bottled water to local families with contaminated wells. We have massive “dead zones” in the Bay of Green Bay where fish can’t live any more because of problems associated with runoff from farm fields. We have toxic algae blooms in lakes. We have… Well, you get the idea.

Once upon a time we dealt with cow manure like this. The cows grazed out in the field, they’d drop a pile here and there, and move on and nature dealt with it. Insects laid eggs in it, animals foraging for food scattered it about looking for the insects, rain would gradually wash it away, and over the course of many days the pile would gradually erode away, absorbed into the soil where the nutrients would be taken up by the surrounding plants.

But you can’t graze 5,000 cows. And since a single mega-farm can produce as much 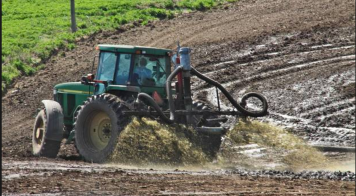 sewage as a city, disposing of manure becomes a serious problem and you end up with this kind of thing over there on the right; massive manure pumping operations dumping tens of thousands of gallons of liquified manure across fields all over the countryside.

Or imagine you live in the country and you wake up one morning and find huge tanker trucks full to the brim with reeking sludge, leaking all over the road, parked right across from your house like my friend did a couple of years ago. They woke up that morning to the sound of heavy trucks, went outside, and found this going on right in front of their house.

Each one of those trucks has about 8,000 gallons of manure in them. And they were rolling in like that all day long, dumping the stuff into a portable holding tank set up in the field while massive pumps pushed it down hoses to the tractors in the field that were spraying it. The stink was so bad they and everyone else within a quarter mile had to evacuate their homes.

There are existing rules and laws controlling the disposal of manure, but by and large those are pushed to the limits, exceeded, even blatantly ignored.

I have to admit that the situation has gotten better, at least around here. But that’s because I wasn’t kidding about people having to evacuate their homes during one of these big pumping operations. Threats of lawsuits and warnings from local governments to take action forced the worst of this nonsense to be curtailed, but it still gets pretty bad around here sometimes.

It wasn’t until about 40% of the drinking water wells were contaminated in some parts of the state like Kewaunee County that the DNR was forced to act, and then only after the situation had gotten so bad that communities were starting to give out bottled water. The DNR announced stricter regulations and enforcement, with backing from the state legislature, and it looked like they might be finally getting a handle on this.

But no. Now the lawsuits have started. At least two ag business associations have filed suit against the state claiming the DNR doesn’t have the legal authority authority to make the new rules. And because the state legislature severely curtailed the authority of the agency over the past few years, they are quite possibly right. Without intervention by the state legislature, the DNR probably doesn’t really have the legal authority to put the new regulations in place.