It’s been a while since I talked about the gardens here, so let’s take a peek at those. It’s been an odd season here with above normal rainfall and rather cool temperatures. It’s been good for some things, bad for others. 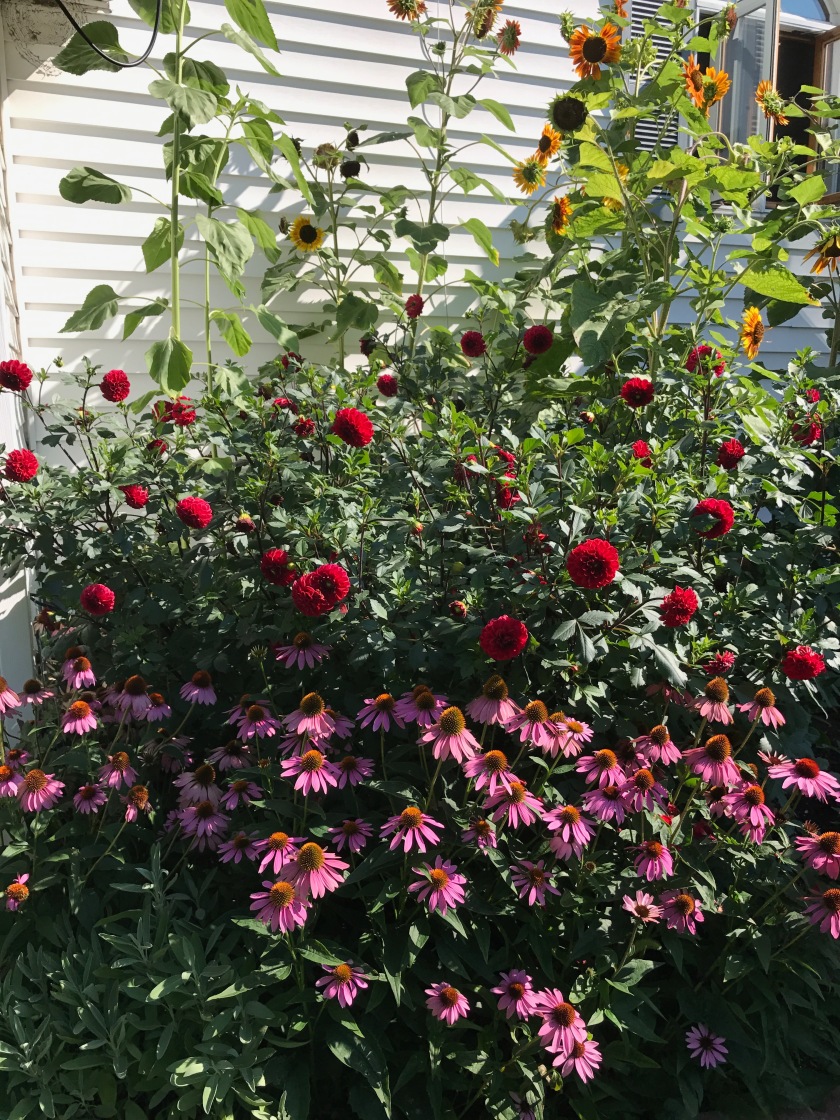 We aren’t sure what in the world happened to the dahlias this year. Those are the red flowers behind the cone flowers in the foreground. They just went absolutely crazy. I’ve never seen them get this big before, at least not around here. They’re 4 – 5 feet tall and so thick and lush that it looks like a jungle in there. The cone flowers seem ridiculously happy back there too as you can see. And the sunflowers — oh brother, they’re pushing 7 feet tall.

Handy hint – if you love birds, especially finches, put in some sun flowers. We’ve been putting a few sunflowers in back there for years. It’s right by the window above the kitchen sink and later in the season the finches swarm around that area going after both the cone flower seeds and the sunflowers. They’re great fun to watch, arguing with each other, dangling upside down like little acrobats as they go after the seeds. 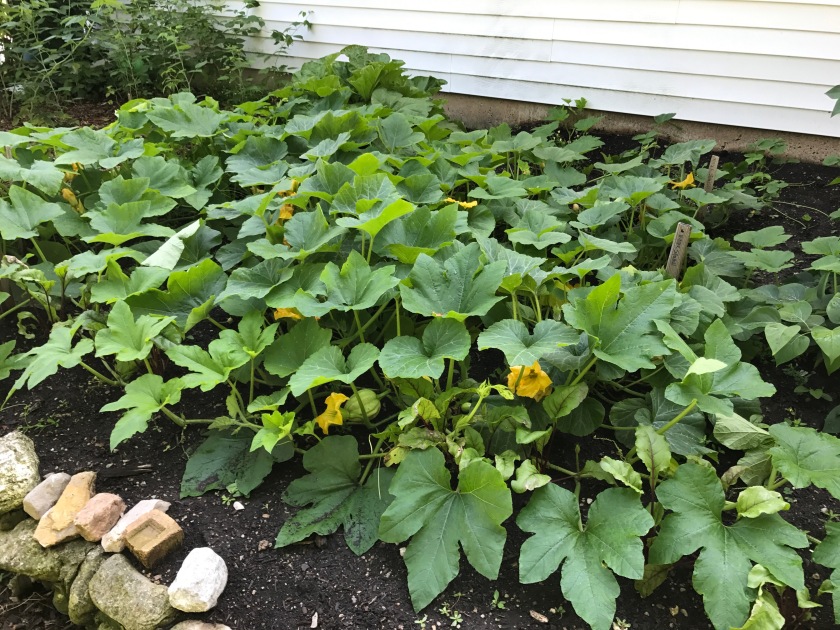 The butternut and acorn squash have completely taken over the garden at the back of the garage. We’ve had issues back there because it gets shaded out quite a bit. We’re constantly dragging the vines out of the lawn, out of the raspberries, out of, well, out of everything. They seem to grow a foot or more every day. Absolutely loaded with squash now and still blossoming. We hauled a lot of compost into this bed also last year and it’s paying off now.

One of my issues with modern hybrid flowers is that they’re all show and no scent. I am a very scent oriented person, and it’s always disappointed me that so many flowers that I remember having amazing aromas when I was a child smell pretty much like nothing these days as the plant breeders have selected for ever more showy flowers, and sacrificed the scent, sort of like how they’ve selected vegetables for high yield and tougher fruit to make transport easier, and lost much of the flavor. The alyssum, though, make up for it. Tiny, tiny little flowers that put out an incredible amount of perfume. The scent is almost intoxicating.

Then we have these guys. They sort of look like something from an alien planet or exotic jungle, these beans. The leaves are a foot across, a rich burgundy color when small, then changing to a reddish-green with red veins as they get bigger. They’re about 6 feet tall right now.

The hostas up front have been enjoying themselves too this year. I’ve always loved hostas and we turned this into a hosta garden a few years ago. It had been a mish-mash of odd bushes, grass that never grew properly, some very invasive bushes that someone decided looked pretty. It was a mess. We ripped everything out, tilled up the whole works, put in the cedar fence and started putting hostas in. And we also seem to have pots of plants all up the stairs, along the deck… good grief, where did all those plants come from? 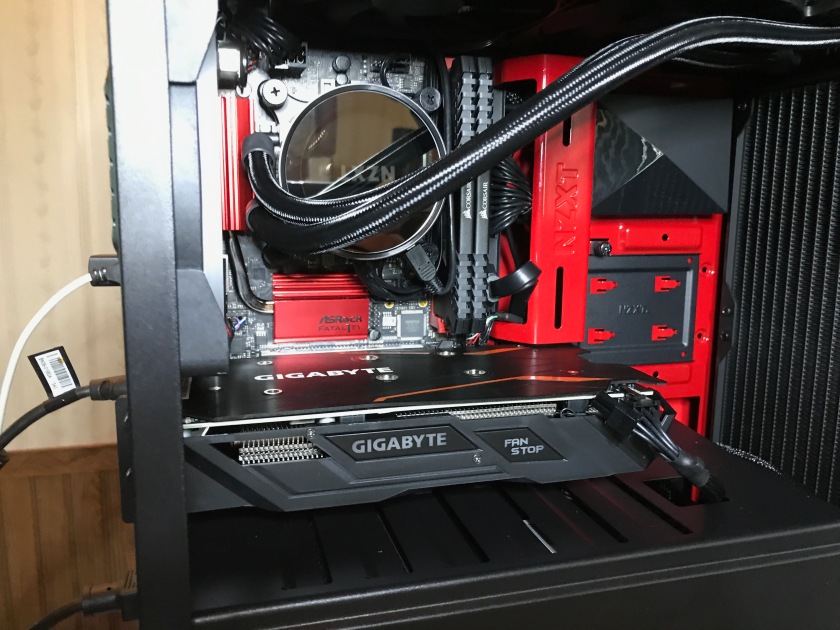 Okay, this isn’t a plant. In the process of building a new gaming computer. My Razor Laptop died on me a couple of months ago and we’re building a new one. We’ve been working under the belief that anything that’s worth doing, is worth doing to excess, so this thing is fairly well loaded up with every goofy thing you can imagine. Interior lighting systems, the CPU cooler has a sort of vortex lighting effect built into it, the fans light up like multi-colored strobes, matching LED light strips inside, even the dopy RAM lights up.

Unfortunately the Nvidia video card you see there was was DOA. It worked the first time we turned the computer on. Then we shut it down, did some work on the machine, turned it on, and the card was dead. Sigh… It works on the MBs built in Intel graphics, but that isn’t suitable for any kind of gaming. Grrr… So it’s going to be a while before we get it up and running the way it should be.

Still, dear lord that thing is fast. Eldest son was so impressed he’s thinking of building one for himself.