I never thought I’d have a cactus growing outside in my garden here in Wisconsin, but this is the third year we’ve had Mr. Spiny and he really seems to like it here.

When we pulled this guy out of the compost heap and brought him home I never thought he’d survive more than a single summer. Instead it’s been thriving back there against the wall of the house. When we got him, he wasn’t in real good shape to begin with, but he showed his appreciation for being rescued by putting out brilliant yellow flowers, then embarked on more than doubling his size by shooting out new pads. Then last year he put out more new pads, and this year I counted 40 new pads sprouting off him.

I admit I know nothing about cactus, so him surviving and thriving is due more to him and dumb luck, but I’m pleased. Since we got him, I’ve found the same type of cactus out in Wyoming (found the hard way, I knelt on one. OMG did that hurt!). So if they can survive Wyoming winters, it makes sense that they could survive here.

These guys put on a brilliant show in early summer, but to be honest I don’t really like this plant all that much. The long, pointed leaves flatten down to the ground and look shaggy and unkempt and kind of ratty. But when they flower they do look pretty for a while.

These — I love the flowers, but they’re annoying. The flower stalks are spindly and very tall and tend to fall over. And they’re rather aggressive, getting into everything. Still, they’re really cheerful looking 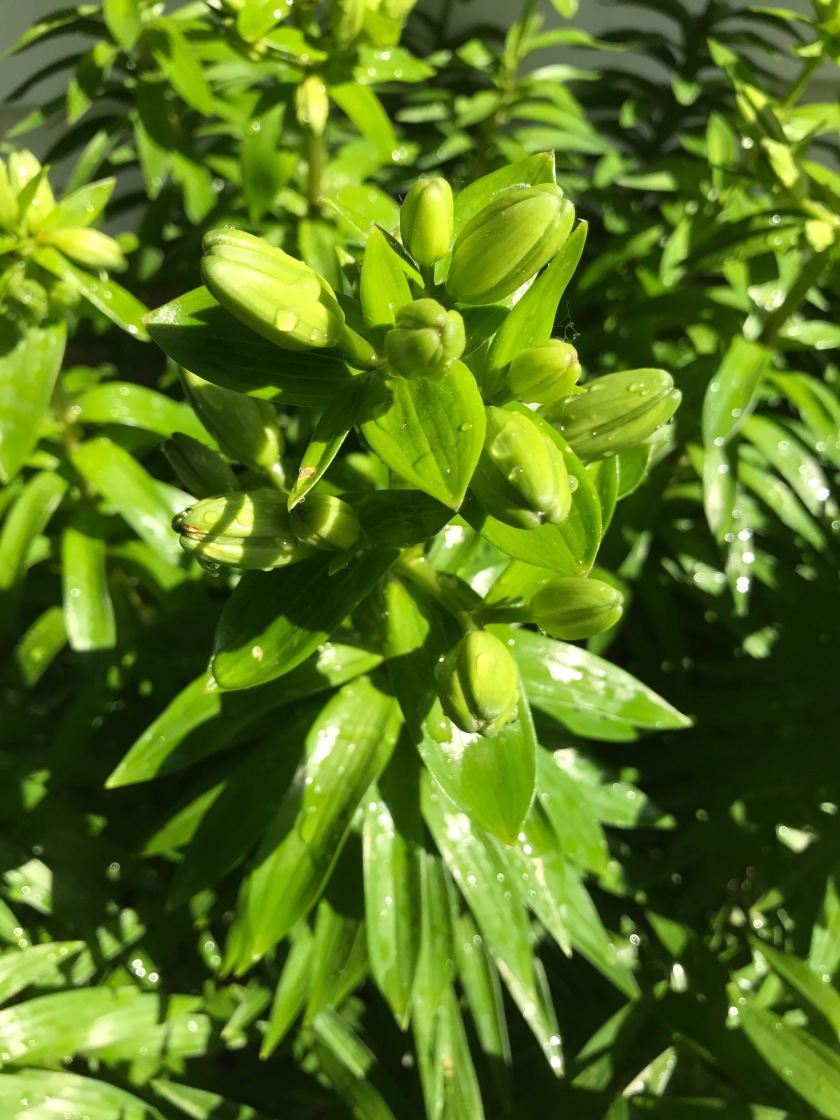 I’m eagerly awaiting the lilies. They’re loaded with buds this year. Ours are coming a bit late. Some of the neighbors’ are in full flower already, but they’ll be here soon enough.

This guy, he popped up out of nowhere, a “volunteer”, as they call them, I guess. We didn’t plant him. It’s always fun when surprises like this pop up in the garden. Well, sometimes. Sometimes there is stuff you don’t want, like creeping jenny and ragweed, etc. But when something this pretty pops up? It’s delightful. Our maple tree in the back yard was a volunteer, springing up from seed in one of the vegetable beds one year, so we let it grow there for a couple of years, then moved it to a more hospitable area before finally putting it in its permanent location. It’s about 8 inches thick now and 20 feet tall.