the beds here. That old tiller… It is literally almost as old as I am, probably dates to about the early 1960s. It’s exactly like one we owned when I was a little kid. The dopey thing is the most reliable piece of equipment we own here. It just plain works, and always has. Pull it out of the garage, fill it with gas, check the oil, and pull the starter a couple of times and it starts. It’s an ancient Briggs engine, the brand name, Gilson, is put on with stickers, but the thing is built like a tank.

I’m afraid I was a bit sneaky. Every year MrsGF agrees that we really, really need to work up some of the long established beds because the soil has deteriorated so badly. But when I finally get the tiller out and start to actually do it, ah, well… This flower is so neat and it will come back again this year, and the cone flowers are going to come up there, and this plant is in there and she doesn’t want to do that. And to be fair, there are some nice plants in there, but in order to save those few nice plants, it means the ground is so bad in those areas we can’t plant anything else but weeds.

So I got her to agree to do it yesterday, and while she’s at work this morning I got out there quick and worked everything up before she could change her mind.

This area here was first an herb garden, then we tried strawberries, which didn’t work that well because, well, the soil was so bad. So the oregano more or less took over everything except for one patch where the cone flowers had established themselves. It’s a fantastic spot, sheltered in the “L” of the house, with exposure to the south and west, so it’s warm, sunny, etc. But the soil… Oh dear lord it was bad in there. When we first put this bed in we hauled in a lot of compost and worked it in, but that was something like 20 years ago and nothing has been done in there since. The soil was so hard I had to go over it four times with the tiller.

We call this spot the Stump Garden because that’s what it was, originally. It was a big old stu

mp when we bought the place about 20 years ago. We could have hired someone to come in and grind it out, but why pay good money for something like that? My solution was to build a retaining wall around it, fill it with dirt and compost, and plant stuff on top of it, my thinking being that sooner or later the stump will take care of itself by rotting away.

And it did, and in a remarkably short amount of time. Within about three years there was nothing left of it under the dirt. We decided we liked having a raised bed there, so we lowered the retaining wall a half foot or so and kept it in place. We’ve found this is an ideal place for growing lettuce. It’s well drained and in partial shade which helps keep the lettuce and greens from bolting. We re-seed it a couple of times during the summer so we have a constant supply of fresh salad greens well into the fall of the year.

The heart garden is called that because it’s sort of heart shaped. My only regret is that I didn’t make it bigger. Much bigger. Because I hate lawns. No excuse for lawns. None at all. I keep trying to kill mine off, but it keeps coming back no matter what. But I’m still working on it…

It’s not far from the herb garden area and I’m seriously considering linking the two up and turning it into the “Shapeless Blob” garden as an excuse to get rid of more grass.

This is another one that desperately needs work, but MrsGF was reluctant to let me work up because there were some plants in there she liked. Even though she told me to work it up last night, I suspect now that I’ve actually done it I’ll hear about it, especially if whatever I plant in there doesn’t work out well.

One year we put the entire thing in alyssum, a variety with an incredibly intense smell. When you’d walk out the back door of the garage the entire area was covered in this incredible scent. I’m tempted to do that again. Maybe. Not sure. The area is shaded from about noon on by our pear tree so whatever we put in there has to be able to deal with that.

Then there’s the garage garden, which is by the garage. Well, of course it would be, 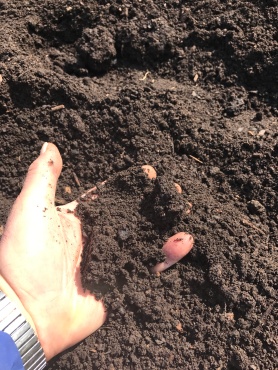 wouldn’t it. Garage. Garden… We really worked this one over last year. The soil was terrible in there. I covered the entire area with about six inches of compost and worked it in last year, and that has helped enormously. I have high hopes for this area this season.