Now there is a whole slew of test equipment some people claim you need. And you go out and spend your hard earned money on it and find that well, no, you didn’t actually need it. The fact of the matter is that unless you’re really into electronics development work, need to diagnose and repair some rather expensive and complicated equipment, you don’t really need much more than a volt/ohm meter and a couple of other items. And this is coming from someone who admits he has a — a problem, shall we say, when it comes to tools and test equipment. Basically I see a new tool or piece of test equipment my eyes glaze over, I start to shiver uncontrollably, instinctively reach for my credit card…

What do you really need? Well, at the top of the list is a decent volt/ohm meter of some sort. Usually abbreviated as VOM or DVM for the digital versions, or multi-meters. It’s pretty much an essential tool. But which one do you get? They come in all kinds of shapes and sizes, all kinds of different options, and prices that range from little more than pocket change to “OMG who the hell can afford that”.

You don’t need to spend a fortune on a VOM, but you don’t want to get one of the bargain basement varieties out of the $2 bin at the lumber yard either. For the average electronics hobbyist you can get a perfectly good VOM for around $30 – $40. I wouldn’t spend more than $150 or so on one for one unless I was, oh, repairing equipment on a professional basis or something like that.

Which one do you get? Well, if you’re me — all of them… Okay, that’s an exaggeration but

the fact is that I have about a dozen of the dopey things laying around, from small pocket models smaller than a deck of cards to bench top models and even rack mounted units. Including one of these over there on the right. I don’t think I have it any more and it never worked in the first place and I have no idea where the thing even came from because I don’t remember buying it. (I think people break into my house not to take things, but to leave me things so they don’t have to pay recycling fees…) And it wasn’t even a VOM come to think of it but some kind of frequency counter or something…

Never mind, let’s get on with this.

The kind you do need is your basic VOM, something like one of these over there on the left. 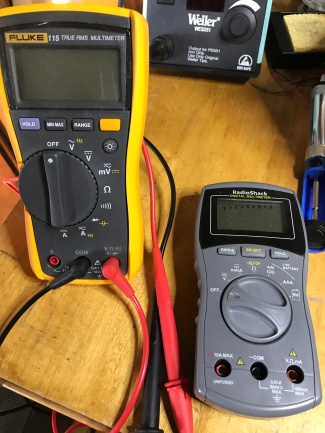 The Fluke is the one that lives on my workbench and that I use the most often these days. The Radio Shack model… Well, heck, I probably have a dozen RS meters because when I was a technician out in the field things happened… Oh, brother, did things happen. And RS stores were just about everywhere and the stuff was cheap and reasonably good.

Anyway, something like that Fluke will set you back about $150. The RS model is a lot less. Think I paid about $40 for that one something like 15 years ago. It seems about as accurate and useful as the Fluke, so why did I buy the Fluke? Well, it’s — it’s so shiny…

They both do pretty much the same things for the most part. Both have replaceable probes/leads. And yes, you need that. You do not want a meter that has the leads wired directly into the meter. Accidents happen – melted probes, broken, frayed wires, melted wires… Stuff happens. (You did remember to unplug the equipment and discharge those high voltage caps, right? Hmm?)

Another piece of test gear that is pretty much essential for the amateur radio operator is something called a dummy load. No, this is not a truckload of ventriloquists dummies. Nor is it a load of politicians. It’s a sort of, oh, let’s call it a radio black hole.

When you’re testing and/or working on a transmitter, you have to actually transmit with it. And you need to hook the output of your transmitter up to something that can suck up the power or it can either damage your transmitter or send potentially illegal radio transmissions out into the air and enormously irritating the FCC. Or your neighbor who suddenly finds all of the electronics in his/her house going wonky.

A dummy load is really just a big, heavy duty resistor or resistors that absorb the power being dumped out by your transmitter and converting it to heat. Nothing magic, just basic physics. You can probably build your own if you like. There are tons of examples out there. Or you can buy one. Ones that can handle under 100 watts of power are out there for well under $100, some down in the $30 range.

If you fiddle around with amplifiers like I do, you’re going to need something that can handle a lot more power because those big HF amplifiers can potentially put out well over 1,500 watts. One of the cheapest methods of dealing with it was the so-called “cantenna” which was basically a paint can with a big honking (that’s a technical term, honking, you know, like ginormous, or widget, or doodad) resistor sitting in a gallon of transformer oil used to cool it. They’re still on the market and they do work pretty well. You can pick them up for under $100.

If you don’t like messing around with all that oil and stuff, you can get fan cooled dummy 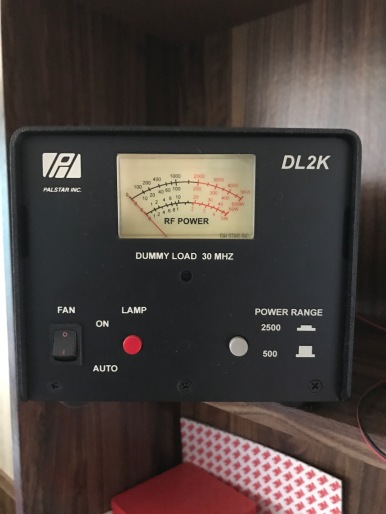 loads that can handle higher power, but you’ll pay for it. Something like the Palstar over on the right will set you back around $375 or so. A bit less if you can find one used. I think MFJ makes one as well.

Which one do you need? Well, as much as I like the DL2K I’m the first to admit that you don’t need one unless you do a lot of fiddling around with high power amplifiers. At the time I picked this one up I was doing just that and it was very, very useful. But most people don’t mess around with amplifiers that often and you can get away with something a hell of a lot cheaper. Even if you do use amplifiers, one of the “cantenna” type dummy loads will probably work just fine for you at a quarter of the cost.

That’s the thing with some of this equipment. It’s very handy to have around, and

sometimes you absolutely have to have it. But you’re going to use it so rarely that you wonder if it’s worth the cost. It’s like this thing, my antenna analyzer over there on the left. It is a genuinely useful gadget for analyzing the performance of antennas, feed lines, helping determine antenna lengths for specific frequencies, etc. but how often do you really need one?

They aren’t exactly cheap. A good one will set you back about $300 or more. And while they are very useful indeed, I hesitate to recommend you buy one because chances are good you don’t really need one. I picked it up because I love messing around with antennas. I have three antennas in actual use at the moment and have about five more I want to put together and set up or am planning on building and experimenting with once the weather gets a bit better. So for someone like me having one of these makes sense. But even I don’t use it all that often. In fact, as often as not I lend the thing to other amateur radio operators who are setting up antennas so they don’t have to go to the expense of buying something they’re only going to use once or twice.

That brings me to this thing, another piece of test equipment you probably don’t need but really, really want, the oscilloscope. Look, I know you want one. You really, really do. It has all those fun 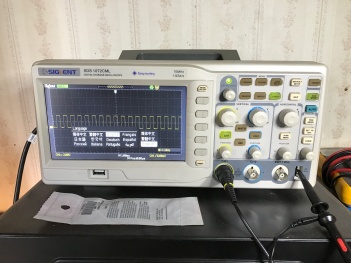 buttons and knobs and that fancy display and it’s just so cool. But do you need one? Probably not. I’ve had this thing for like three years now. How often have I actually used it for anything serious? Twice. Twice in three years. Sheesh…

This isn’t the first ‘scope I’ve owned, either. I’ve had various “old school” CRT based models of various vintages over the years, and to be perfectly honest, I’ve almost never used any of them. They look really, really cool sitting there on the workbench. Sometimes I’ll turn it on and smile at it, pet it, scratch it behind the ears, tell it that it’s a good ‘scope and give it a treat, then turn it off and go back to whatever I was doing. But actually use it? But owning an oscilloscope seems to be, oh, like some sort of right of passage for a lot of amateur radio people. Having one of these sitting on the workbench means you’re “serious” about it, not just fiddling around.

That’s the problem with a lot of the test gear out there. It’s often something you’ll only use once or twice, and that’s it. So is it worth investing hundreds of dollars in something you’re going to use once in ten years?

Unless you’re really into circuit design, equipment repair, experimentation, development work, etc. most of the fancy test gear you see out there isn’t going to be very useful.

How often are you going to need a spectrum analyzer? Probably never unless you’re repairing a lot of equipment. Or a function generator? I’ve got one of those as well. I’ve never used it. At least that one didn’t cost me a fortune because I built it myself.

Now I’m not saying you shouldn’t buy the stuff, but make sure you really need it and can afford it before you pull out the credit card. You might also be able to find a super cheap version of the test equipment that isn’t very sophisticated or even isn’t very good, like some of the cheap oscilloscope kits out there, but which will work well enough for what you need it for.

You can often borrow the stuff from a local amateur radio or electronics hobbyist if you can find one. We’re typically friendly people and once we know you aren’t going to go running off into the night and selling off our stuff on eBay or something, we’re generally more than willing to lend you stuff.