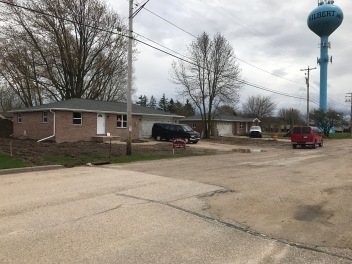 afternoons when the weather permits and I’ve been watching it with some interest. It may not look like it, but this is a major recycling project. The photo doesn’t do those two houses justice because it was a rainy, dreary day and I was using the cell phone, but those two little houses are actually really quite nice, with new brick facades on the living quarters and a matching stone facade around the garages. Once they get the landscaping done they’re going to be really very nice.

This is actually a very ambitious and rather complex project, because those two houses were actually a single duplex that was moved to that site from another location. The duplex was literally cut in half, separated into two individual houses and garages. While it sat there on the big dollies that were used to transport it, they dug basements, poured foundations, then mounted them on the foundations, then gutted both of them, completely remodeled both, put on new roofs and gutters, did the brick and stone facades, did new heating systems, electrical and plumbing, basically completely rebuilt both of them.

So they took an unwanted old building, moved it to a new location, and turned them into two nice little houses that in the near future will be the pride and joy of their new owners.

It seems like a great idea, doesn’t it? It’s the ultimate in recycling. Instead of tearing down an old house, move it to a new location, remodel it, turn it into a desirable property. So if it seems to make sense to do this, why isn’t it done more often?

Cost, of course. I’d be willing to bet that the total cost of this project is going to be darn near as much as it would have been if they’d built both of those from scratch. Maybe even more.

So If you ever wonder why they don’t do this more often, the reason why is the cost. Moving buildings is very expensive, very complicated (just think of the logistics involved in moving/lifting power lines, etc.) and very tedious. And once you do get them on site, they need extensive renovations, updating, etc.