Yet Another Cell Phone Scare

A significant number of people have been claiming cell phones cause cancer ever since cell phones started to come into common use. And every once in a while another “scientific study” is trotted out to support that claim. Invariably it turns out that either the study was badly flawed or the story was the result of some news reporter who didn’t know how to read a scientific paper, didn’t understand statistics, or was even just making stuff up. 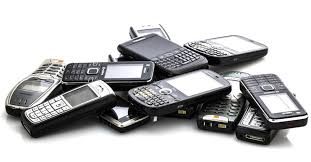 The latest scare is the media claiming there is a study that “proves” cell phone use causes brain cancer. Even NBC apparently bit on this one. And all of these news reports ignore the fact that this study is, well, weird and it’s results highly questionable.

The study is real. You can read it yourself  here . And if you actually read it, which most of the news media didn’t bother to do, you’ll notice some very curious things which don’t make a whole heck of a lot of sense.

There were actually two studies, one of rats, one of mice, looking at the effects of exposing both groups to radio waves in the frequency ranges used by cell phones. The exposure began in utero, by exposing the mothers of the animals to RF (radio frequencies) before they were born, and continued during the entire study. They were exposed in a set cycle, 10 minutes on, 10 minutes off.

Now, of the animals who were exposed like this, the male mice, female mice and female 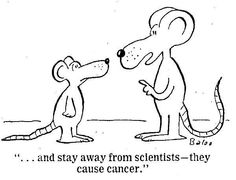 rats showed no increase in cancer. None. But male rats, on the other hand, did, with a small percentage of them developing brain and/or heart cancer of a specific type.

Let me repeat that, the only animals that showed any adverse effects were male rats. Not female rats. Not male mice. Not female mice. Just male rats. Why did only the male rats develop an elevated risk for cancer? Why didn’t the mice develop cancer as well? Why not female rats? Don’t know. And the numbers of male rats that were affected were really quite low as well, down in the single digits. This is a very odd result and it makes one think there might have been something else going on here other than exposure to cell phone radio frequencies.

There are some very odd things going on with this study that need to be explained before one can draw any kind of conclusions from it. If you want to read a review of the study by a real doctor, go over to Neurological by Steven Novella. He takes a better and more in-depth look at the study and its problems.

So why do these stories keep popping up? Money, of course. Scare headlines generate eyeballs on TVs and clicks on websites, and that means increased revenue for the hosting entity. And since things like editorial integrity, accuracy and common sense have long ago flown out the window in favor of profit at any cost, we get garbage like this.

Despite all of the very serious problems associated with the use of the herbicide dicamba, it’s been approved for use by the EPA for the 2019 and 2020 growing seasons. While the agency and the makers of the stuff are touting new rules that will, they claim, reduce or eliminate the problems with drifting, the new rules aren’t much different from those in place during 2018 when more than 1 million acres of crops were damaged by the drifting herbicide. A lot of farmers who normally wouldn’t plant the GMO soybeans that are resistant to the herbicide it feel they are being pressured into paying for the more expensive seed just to keep their crops from being damaged by drifting herbicide from their neighbors.

As usual, the Farm Bill has been languishing in the Congress for months now. The problem has been that the House wants to make dramatic changes to the SNAP program that, among other things, would require almost everyone except children and the elderly to work at least 20 hours a week in order to get benefits. The Senate doesn’t want anything to do with some of those changes, and there has been no real attempt at compromise between the two bodies. But now that the House will be controlled by Democrats come January, I think you’ll see some people trying to desperately get anything passed before the change over to prevent the Dems from having any influence on the bill.

For years now supplement makers have been pushing vitamin D and pushing it hard, making claims that range from the silly to the dubious to the downright dangerous about the stuff. And while D is important, do you really need to take a supplement at all?

Well, a 5 year long study says no. Vitamin D supplements did absolutely nothing to reduce the risk of cancer or heart problems or stroke. Zip. Nada.

Another study also looked at fish oil supplements and the results were disappointing there as well. Fish oil didn’t lower the risk of heart disease or cancer either. But here was a statistically significant lowering of the risk of heart attack. The lowering of risk of heart attack was especially noticeable among African Americans. They aren’t sure why but there is some suspicion that it might be because African Americans could be eating less fish than the rest of the population.

One good thing about the study was that it while it showed that D supplements did no good at all and fish oil supplements didn’t do very much, there seemed to be no adverse side effects from taking either of them at the levels used in the study. The same can’t be said for a lot of the other snake oil the supplement industry pushes.

The supplement industry is a pet peeve of mine. It scams people out of billions of dollars a year by selling products with vague promises that they will do something to help them, when, in actual fact, they do nothing to help people and can even be down right dangerous. Thanks to the Dietary Supplement Health and Education Act of 1994  supplements are almost totally unregulated. Supplements are not approved by the FDA, are not tested by anyone except the manufacturer, and they don’t even have to prove they’re safe before they sell them. The FDA is specifically denied authority to regulate or test these products. The only time the FDA can step in is if there is evidence that a product has actually harmed someone. This means that ineffective and even dangerous products can be sold freely until it becomes obvious that people are being hurt by them.

Even more troubling is the fact that independent analysis of a lot of products discovered that what you see on that label may not actually be in the product itself, and that there could be a lot of things in there that aren’t listed on the label. When tested for content, it’s been found that a significant percentage of these products have inaccurate labels. Some had little or none of the “active” ingredient in them. A lot of them had fillers that were not listed on the label. Some were contaminated by things that were downright dangerous. Some had actual prescription drugs in them. Basically you don’t know what the hell is really in that capsule.

What it boils down to is this: If you eat a reasonably well balanced diet that is fairly heavy on vegetables and fruits, and eat fish once or twice a week, you don’t need supplements of any kind. You’re getting more than enough of the right nutrients to keep you healthy. The health claims made by these supplements, whether herbal or vitamins or oils or whatever, are completely bogus.

I found this one a bit surprising. Prices for corn, soybeans and milk are horrible and don’t show any sign of improving any time soon. A lot of farmers are in serious financial trouble. Wisconsin alone has lost almost 500 dairy farms just this year. So you’d think that farmland sale prices and rental prices would be going down. But that doesn’t seem to be the case. Prices have been stable and even creeping up a bit in some parts of the country. In this area farmland prices have been up about 4% overall. But as the article in that link over at AgWeb says, this isn’t going to continue. Farmers have been operating right on the edge, financially speaking for 3-4 years now. With corn sitting at around 3.70 on the commodities exchange (and cash price being quite a bit less than that), well, if you’re paying $200/acre rent or more to grow corn, you might as well not even bother.

In this neck of the woods land prices have been stable, even creeping up a bit, but that’s due to the big mega-dairy operations needing land for manure disposal. If they don’t have enough acreage to dispose of their manure, they can’t get operating permits, bank loans, etc.

Some of the rental prices I’ve been hearing of in this area are a bit ridiculous. One fellow told me his neighbor was renting a 20 acre parcel to one of the mega-farms for $600/acre. They crop it, yes, but they wanted it mainly for manure disposal. Now I’m not going to question the fellow’s statement, but, well, $600/acre is just crazy and I suspect he misheard that figure.

I am really glad my sister and I sold the farm when we did. We got out almost at the peak of the market in that area. If we’d waited another year or two to sell we’d have gotten $1,000 – $2,000 per acre less than what we did.