MrsGF and I set aside Saturday to clean up the last of the gardens around here. We’ve had several hard frosts now and almost everything has died back so there was no reason to put it off any longer. So, of course, this happened… 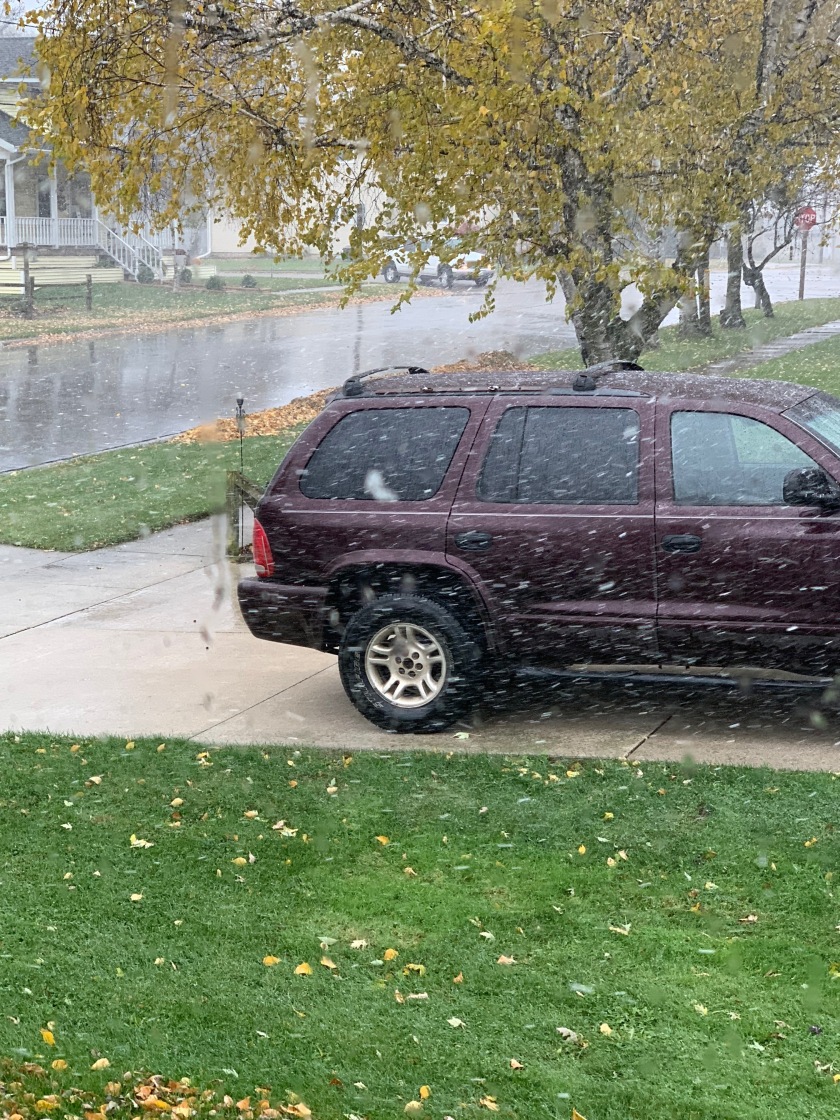 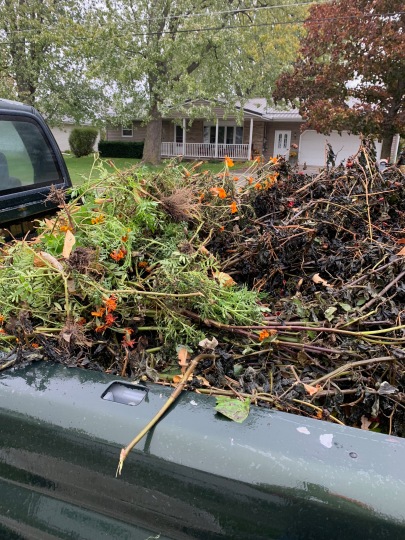 We got out the winter coats, hats and gloves and went at it anyway because, well, it has to get done. It wasn’t exactly a fun job in that kind of weather, but we did get it done. There was no point in putting it off because this time of year the chances of the weather being much better are pretty slim.

We ended up filling the entire back of the old truck. It’s amazing how much debris we ended up with after cleaning everything up. And this is just half of it. We already had taken out the remains of the tomatoes, squash and a lot of other stuff over the last few weeks. Good thing we live just down the street from the town’s compost site. That makes this a heck of a lot easier.

The snow didn’t stick around. It was too warm for that. But the wind did, with gusts of up to 40 mph all day. That kept us from raking up the leaves in the yard, but we got that done on Sunday. So we have just about everything cleaned up outside now.

All things considered, the growing season was pretty successful this past season. The tomatoes and peppers were ridiculously prolific. Our little lettuce bed kept us supplied with greens when we needed them. Some things weren’t very good, and some of that was our own fault.

We keep trying to plant onions and they never seem to make it to maturity for us. They start out good, but as they mature they seem to just stop growing before they get anywhere close to full sized. I don’t really mind that too much because my main interest is in having fresh green onions, not in full size bulbs for storage. So while that crop might look like a failure, it really isn’t because I get what I want out of it.

The squash disappointed. The acorn squash never developed fully at all and were a total loss, and while we did get a few absolutely beautiful butternut squash (wow, they tasted good!) they didn’t produce as well as they should have. We aren’t sure why because they were in the same place they’d been last year where they’d done really well. We’re going to have to reconsider planting squash. The stuff takes up a huge part of the garden and if all we’re going to get for it is three squash, well, there’s not much point in planting them and we need to look for alternatives.

Our rhubarb plant wasn’t looking too good towards the end of the season, but we think that’s the fault of the squash which were planted nearby. It was getting shaded by the huge squash leaves and wasn’t getting enough sun, so we’re hoping it will come back.

I raise that rhubarb more for nostalgic reasons than because I like it. For me, a little bit of rhubarb goes a long, long way. But I have fond memories of playing under the huge rhubarb plants we had when I was a little kid on hot, summer days, and whenever I see that thing in hot, summer weather it brings back memories that make me grin. So yeah, I’m going to grow rhubarb if I can even if I don’t particularly like eating it.

Let’s see, what are we planning on changing — I’d like to put in more raised beds if I can find a good location for them. Those two 4 X 8 raised beds I put in a few years ago are ridiculously productive. If I’d known how good they were going to be I would have built them long ago. Just those two beds provide more vegetables than the rest of our gardens combined some years. The problem is where to put more of them. We just have too many trees so finding a spot where there will be direct sunlight for more than 4-5 hours a day is difficult here. About the only decent location is on the south side of the house and there isn’t much room there any more.

Of course that could change if the pear tree doesn’t survive the damage it suffered. I figure about a full third of the canopy of the tree went down because the limbs were too loaded with fruit to be able to handle a thunderstorm that rolled through here. I’d hate to lose that tree. We planted that, oh, about 17 years ago, a couple of years after we bought this place. It’s not a very good looking tree, it leans at a crazy angle, but wow, it produces some of the most delicious pears I’ve ever had.

But on the other hand, if we do lose it, it would open up a very large area that could be garden with full sun. So if it does have to come down, well, it wouldn’t be the worst thing.

With MrsGF retiring in March she’s trying to figure out just what the heck she’s going to do if she isn’t working full time any longer. Right now it looks like as soon as she pulls the plug on her job she’s going to be dragging me along into the Master Gardener classes. Well not dragging, to be honest. I’m rather looking forward to it. We’d talked about getting into the Master Gardener program for a long time but we never had the time to do it. So now is the ideal time for it. She’s been on-line looking to get us signed up for the classes next year. And being able to tack on “certified master gardener” on the byline up at the top of this website is an added incentive because, well, hey, I’ve got an ego too, you know <grin>.

The other thing that is (probably) going to happen after she retires is all of my electronics gear, test equipment, radio equipment, etc. is going to get moved out of the office/library/workshop and moved into what used to be eldest son’s work area in the basement, and the office space is going to be her’s. She loves sewing and craftsy kinds of things but she’s never had much time to actually do it. Right now her work area for that kind of thing is in a small room upstairs. But it’s hot up there in the summer, cold in the winter, and she has difficulty getting up and down a lot of stairs because of her knees. So the solution to that is turn the office on the main floor over to her and have me move my stuff out.

I am not looking forward to moving. Eldest son’s work area down there is still crammed full of old computers and other equipment that somehow never got moved when he moved out years ago. So all of that has to be moved somewhere. Hopefully out of our house and into his house. Then I have to buy or build suitable work surfaces for all my stuff. Then tear down all of my equipment, move all of it down to the basement. Then I have to re-route all of the antenna cables, ground cables and other stuff to the new location down there. Then install a new electrical system down there including 240V lines to run some of the equipment like the amplifiers. Then try to figure out how to set up all of the equipment again because by that time I’ll have forgotten how everything was set up originally. Move all of my computers… Like I said, I am not looking forward to it.

Well, I’ve bored you long enough with this. Time to go.

4 thoughts on “Cleaning Up, Snow, Evaluating the Gardens, And Stuff…”