Tariff Relief Plan Announced At Last. But Only If You Grow Soybeans

USDA finally announced some of the details of the tariff aid package and as a lot of people expected, for a lot of farmers they might as well not even bother. While soybean growers will get a pretty good deal, getting back $1.64 of the estimated $2.00 per bushel they’re losing, for a lot of others, the so called relief is almost an insult. Dairy producers are losing an estimated $1.10 per hundredweight because of the tariffs. They’re going to get a whopping $0.12/cwt. Yeah, that’s right, twelve cents. Corn growers are going to get $0.01 per bushel. That’s not a typo. They’re going to get one cent per bushel.

Why are soybean farmers getting almost all of the “tariff relief” while dairy farmers and corn growers get almost nothing? I have no idea. 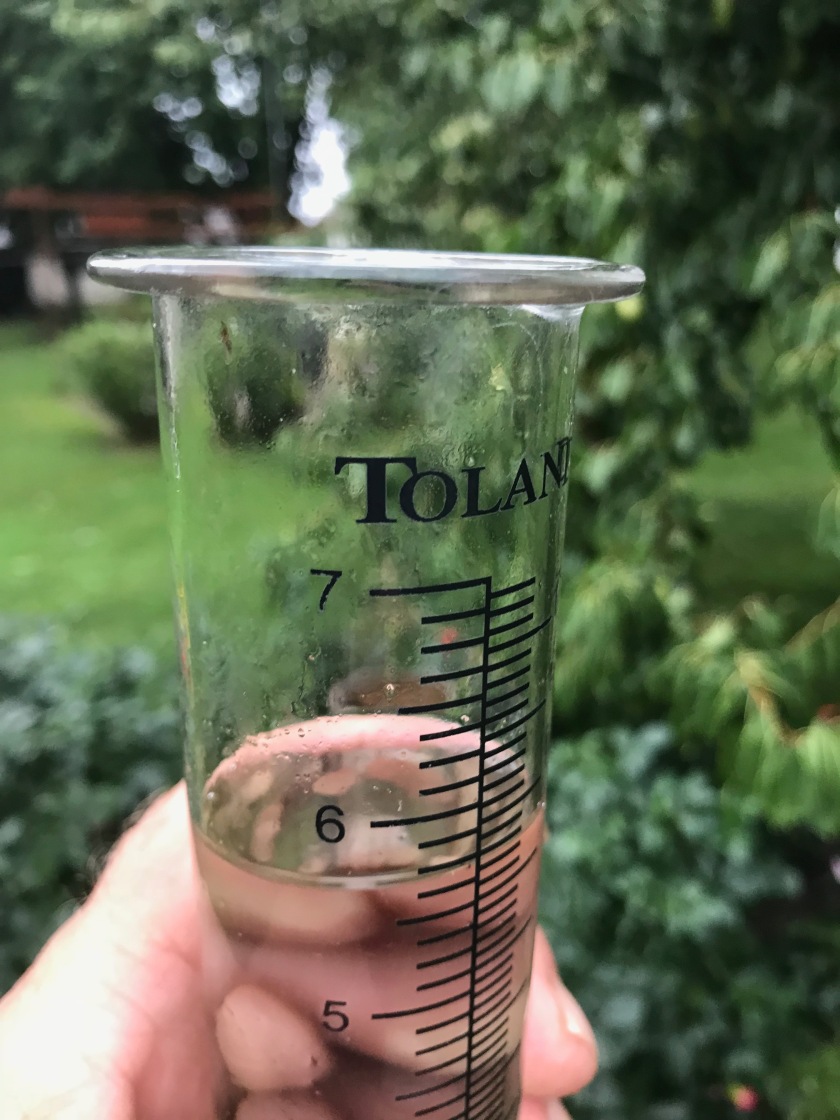 Wow, have we been getting hammered! It’s been raining almost non-stop for days now, with one storm front after another rolling through here. That 5 1/2 inches showing in the gauge there was from just Monday evening. I haven’t heard yet what the grand total is for this whole event, but I imagine it’s going to be in excess of 25 inches for this area over the last few days.

They got hit even harder in the southern part of the state. One town down there reported 11 inches in less than 8 hours. Flooding all over, one person dead after getting swept away when trying to get out of a submerged car. Damage estimates were in excess of $100 million and I’m sure that number is going to grow dramatically because that was from two days ago.

We have pretty good drainage here because they re-did the entire town’s storm water system back in the late 1980s after we had a massive flood here that damaged just about every building in town, blew manholes covers off the sewers, and flooded every basement in town. The revised system obviously works or we’d be up to our necks in water by now.

Meanwhile I’m staring at about 30 lbs of tomatoes I have to deal with today… Not sure yet what I’m going to do with them. I’m thinking tomato soup? I’d better make up my mind soon because there are probably another 30 lbs to deal with out on the plants.

Still, it’s becoming obvious the season is coming to an end. The plants are starting to look like they’re coming to the end of their life span which, I have to admit, is something of a relief.

We put in two plants of a variety called Wisconsin 55, and they’ve been disappointing. Very little fruit from those two despite the fact the plants themselves are ridiculously healthy.

The Early Girl variety have been amazing. The fruit is small, about the size of a baseball, dense, brilliant color, not an excessive amount of seeds, and wonderful flavor and texture that’s been great for making into sauces and soups, which is exactly what we want them for. I’d say the texture is similar to that of a Roma tomato. And they’ve been incredibly prolific. I’ve never seen tomato plants produce quite this much fruit before.

The Early Girl variety is going to be on our “must plant” list for next spring.

Hmm, I’m also going to need to deal with about 20 pounds of banana peppers here in the next few days. I don’t remember what the variety is right now, but wow, they’ve been ridiculous too. The plants are 4 1/2 feet tall and they just keep producing more and more and more.

Most of those are going into the tomato sauces or are being diced up and frozen for future use. But we have so many now that I’m not sure what to do with them. We have more than enough in the freezer for use over the winter.

Not much going on there. I’m still playing with the FT8 mode. Well, I pretty much have to use it because my antenna isn’t very good and with band conditions the way they are it’s about the only way I can make contacts.

I’m closing in on the WAS (Worked All States) and while I claim I don’t really care, I find myself a bit excited by the prospect of having worked all 50 states. I’m only missing 7 states and I find myself keeping an eye out now for the ones I still need when I’m on the air. What do I get if and when I do it? Well, nothing, really. Just the satisfaction of having done it.

I really, really need to get that new vertical antenna up before the winter weather closes in…

6 thoughts on “Stuff. And Nonsense. And Rain”