I thought it was time to answer a few questions about amateur radio that I’ve gotten over the last couple of months, specifically about what kind of tools and equipment you need if you want to do some serious fiddling around.

One thing they don’t tell you when you get your amateur radio license is that you will immediately be overwhelmed with an intense desire to buy tools and test equipment that you never knew you had to have before.

Do not resist this urge. You have joined the dark side. You are ours now… Ah, oh, sorry. Slipped off there for a minute. Happens sometimes. Solder fumes, I think. Now, where was I? Oh, yeah, tools for amateur radio and fiddling with electronics.

Since amateur radio is about electronics, you need the basic gear that all electronics

fiddlers need. The stuff isn’t expensive and is widely available. You probably have a lot of it already. Wire strippers for stripping insulation off wires. Unless you want to use your teeth which is really isn’t recommended. Not unless you really want to pay for sending your dentist’s kids through college.

Needle nose pliers, two sizes and two types. Medium and small, and straight and curved. Wire cutters (no, nail clippers will not work!) are essential. Screw drivers are essential as well, both straight and philips, and you might as well get those funny torx ones too while you’re at it. A set of nut drivers will come in handy, needle nose vise-grips are often very useful, especially the small ones.

Do I really need to tell you not to get the bargain basement variety out of the one dollar bin? Hmm? They don’t last and can actually damage the stuff you’re working on.

Oh, some type of non-conducting probes with pointy ends come in handy for digging around through rat’s nests of wiring, prying components up off of circuit boards, etc. Non-conductive because while the nice women and men in the ambulance are more than willing to try to restart your heart after you’ve jolted yourself senseless, sometimes they can’t get you jumpstarted and… You’re life insurance is paid up, isn’t it? Hmm?

That’s the basic hand tools. out of the way, sort of. Most people who’ve done any kind of messing around with anything (no, not that kind of messing around. My, you have a dirty mind, don’t you?) will have the basic tools already in the cupboard, or under the sink, or in the basement. If you can’t find them, don’t worry. They’ll turn up sooner or later. Usually after you’ve bought another one to replace the one you lost.

Let’s assume you have the basic tools in hand, and look at things specifically related to electronics and especially amateur radio, shall we?

Tools and test equipment generally fall into one of three categories: Things you absolutely, positively need to have, things that are nice to have but you can probably get along without them at least if you can borrow it from someone else, and things you pretty much will never need unless you’re into some kind of exotic and unusual kind of activity. Like, 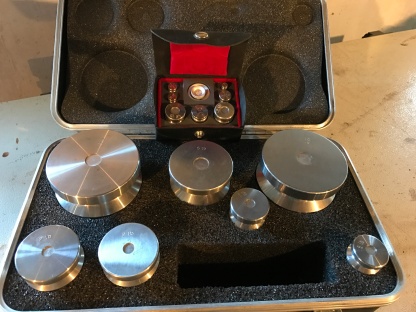 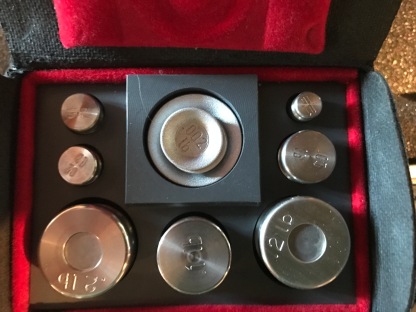 well, this, for example. I can firmly attest to the fact that a set of scale calibration weights is pretty much useless in amateur radio. I keep telling myself I should schlep them around to hamfests along with all of the old laser gear I have laying around, but I can’t bring myself to get rid of the stuff because, well, there might be a scale I really need to calibrate some day, or I might run into a 30 year old laser I can finally use that stockpile of tubes and power supplies I have laying around. You never know, right?

So let’s concentrate on stuff you actually need first. And if you’re in amateur radio, right 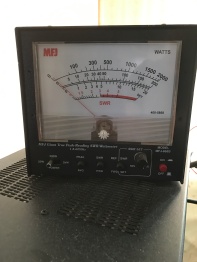 up at the top of the list is this, an SWR meter. Having one of these is pretty much essential. While a lot of modern transceivers have SWR meters built into them, a lot don’t, especially mobile and hand held transceivers. You really do need one of these. They don’t cost all that much, you can get a decent one for well under $50. It isn’t just essential for tuning antennas, it can help prevent you from seriously damaging your transceiver if something goes wonky with your antenna system without your knowledge.

And while we’re on the the topic of SWR meters, let’s talk about jumpers. This is a short piece of coax with a PL-259 connector on each end (or whatever connector you need) that connects between  your 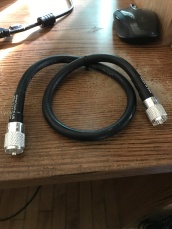 radio and your meter or dummy load or other test gear. They look something like this, and you’re going to want to have a few of them ready to go. Of course you won’t be able to find them when you need them, but that’s the way it goes.

A lot of people make their own. Or claim they do. But soldering PL-259 connectors to coax is such a pain in the neck that I suspect most people just buy them pre-made. You don’t need really super hefty coax for jumpers. They’re generally only 2-4 feet long, so any losses are going to be fairly insignificant.

If you’re cheap, like I am, you can make your own, but don’t make the mistake I did. I picked up an entire spool of LMR-400 coax a few years ago, so rather than spend actual money to buy jumpers, I made ’em out of the 400, neglecting to take into consideration the fact that people tend to move test equipment and radio gear around and LMR-400 doesn’t actually bend very well.

While we’re on the subject of coax, let’s talk about, well, coax. While you can use things like ladder line to connect to your antennas, most amateur radio operators use coax cable 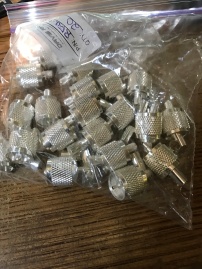 because it’s more convenient. Now you can buy coax from a lot of different sources in various lengths, with the connectors of your choice already installed, or you can save a few bucks by buying the cable in bulk and then making it to the specific length you need and installing your own connectors. The type of connector used for most HF and VHF antenna lines is called the PL-259(1), and you either love them or hate them. Well, no, I don’t know of anyone who loves them. Most people either hate them or, well, hate them. Unless you have a lot of practice installing connectors on coax, you may save yourself considerable grief, the use of language you do not want your spouse/children/pets to hear, burns, solder all over the floor, melted coax, etc. and just spend the extra money and buy it pre-made in the length you need.

But that being said, it’s not all that hard to install the things, it just takes patience and practice. There is also an alternative to soldering the connectors, and that is crimp connectors which use a special tool to crimp(2) the connector onto the line instead of soldering. And while a lot of amateur radio operators swear that crimp connectors are utterly worthless, the fact of the matter is that they have been in use for decades and work pretty darn well and seem to be as durable and reliable, when done correctly, as soldered connections.

When it comes down to it, you don’t absolutely, positively need to be able to make your own coax, attach your own connectors, etc. It’s nice to be able to do it, but you can get the stuff in any length you need, with connectors already attached, and probably attached a hell of a lot better than the average amateur radio operator could do it.