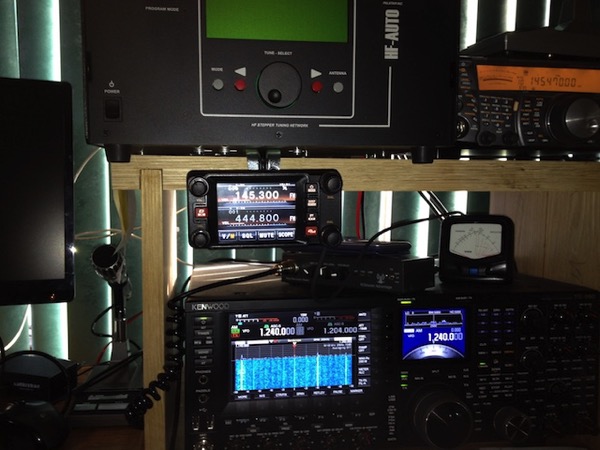 While the Kenwood is a great piece of equipment and extremely versatile, it does have it’s limitations. It works well on VHF/UHF but scanning is painfully slow, when it’s on an active frequency, it doesn’t stay there, it just briefly stops and then continues to scan, and if I haven’t been watching the display, I have no idea what the active frequency was.

The 400 is just far more convenient to use than the 2000 for VHF/UHF. More functions specific to those bands, better scanning capabilities, APRS support and all kinds of other goodies, and it’s a transceiver I’m familiar with since I’ve had one in the Jeep since last summer.

It’s been interesting, though. According to the manual, I should be able to just drop a micro SD card into the radio, back it up to the card, then take the card, plug it into a different radio, and download the setup and memory into the new rig. Basically creating a clone of the original radio. The idea was I could do a backup of the radio in the Jeep, pull the card, drop it into the new 400, and transfer all of the programming into the new one and save myself the effort of having to program it.

Doesn’t work. Oh, it’ll back itself up to an SD card, but you can’t transfer that card to a different radio and load the data into it. It will only read the backup data that it wrote itself.

The radios can ‘clone’ each other, but that would involve pulling the 400 out of the Jeep, bringing it in the house, getting a cloning cable, hooking it up to a power supply, connecting them together, doing the clone, then disconnecting everything and reinstalling it back in the Jeep…

No way… That would have taken probably half a day of messing around outside, with a wind chill down around -25.

So I did it the old fashioned way. I got out my list of repeaters and just programmed the thing. It took a while, but it also gave me the opportunity to weed out the weird stuff that got programmed into the systems originally, like the duplicate entries, the repeaters that I’ll probably never get close enough to fiddle with, things like that.

The 2000 will go back to being an HF rig, I suspect, and held in backup for VHF/UHF work if the 400 goes down for some reason. 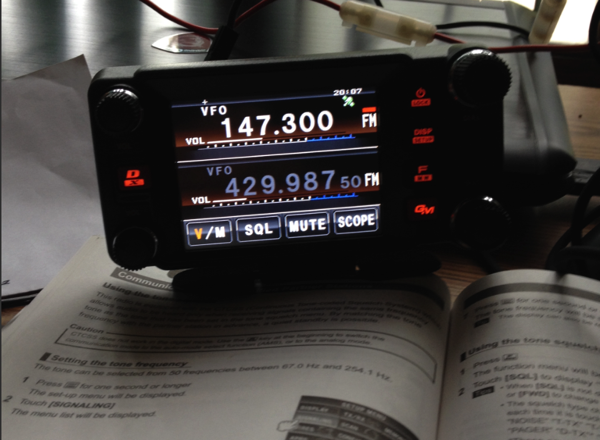 I just took delivery of a new Yaesu FTM-400DR/DE two days ago, and thought I’d give you some info about this new model. The 400 is, as far as I know, Yaesu’s first venture into the C4FM digital world, along with it’s new digital capable repeater and digital capable hand held units. At the moment, there aren’t many of these ‘in the wild’ so to speak, at least not in this area, so I haven’t been able to test the digital functions. This is by no means an in-depth review of the 400, more of a general overview of my initial impressions of the transceiver.

As you can see, the control head boasts a 3.5 inch TTF color touch screen, which is used both as a display as well as for accessing the functions of the radio. The 400 has dual receivers. The active transmit frequency is indicated by the brightness of the display. In this case, the unit would transmit on 147.300, the top frequency. The display is easy to read. As a touch screen, it’s not as responsive as I’d like. It takes what seems to be an inordinate amount of time for it to register a touch, but that’s perhaps because I’m more used to more reactive screens on my iPad.

The metal bracket for the control head is not adjustable and seems most suited for mounting the head on top of the dashboard. I suspect most users will quickly discard it in favor of an aftermarket version that allows more flexibility. I did not wish to run screws into the dash on my brand new Jeep, so I opted for attaching it to the top of the dash with heavy duty Velcro. A single cable with a telephone jack style connector links the head to the radio. The microphone must be plugged into the transceiver, not the control head. I’m not sure if I like that or not yet. You’ll either have to mount the transceiver reasonably close to your sitting position in your vehicle, or buy an optional extension cord to connect the microphone.

You may wish to mount the transceiver somewhere that permits easy access, because the micro SD card slot is on the transceiver itself, especially if you make frequent use of the optional microphone camera you can buy for it.

Getting the 400 up and running was irritating.

First the Automatic Repeater Shift (ARS) that I’ve come to know and love simply does not work. Period. I tried resetting the radio, turning the function on and off, nothing worked to make it functional. It just plain doesn’t work. So that has to be programmed in manually for every repeater frequency. Then the repeater offset frequency defaults on UHF were wrong, so that had to be entered manually as well. (VHF was fine, FYI). Not a big deal because they can be entered manually easily enough, but when you prominently claim a feature in your manual, you should at least make sure it works properly.

Then there is the menu system itself. In order to set up a repeater frequency, you have to go to two different sub-menus, select different options in each, and even then it won’t work because now you have to exit the menu system and go to the separate function system to actually turn on all of the settings you just entered.

Why? I have no idea. Wouldn’t it make more sense to group all of those options and functions together in the same menu?

Once I got all of that figured it, I was finally able to try it out. The radio does work quite well. The receivers seem adequately sensitive. I’m told that my transmissions are clean and sound good.

It has two 500 channel memory banks, one for each receiver. I’ve only done very basic setup with the 400, so I can’t really comment much about the memory system except to say that it seems to work as advertised. You can enter an alphanumeric tag for each memory channel you have programmed (up to 8 characters long) which makes it a lot easier to remember what frequency is what. The touch screen comes in very handy here, allowing one to enter the data directly.

One note: The two memory banks are entirely separate from one another. The first bank only works with the top receiver, the second only with the bottom. You cannot, as far as I know, transfer memories from one bank to the other. If you wish to duplicate, for example, a repeater, in both banks, you’re going to have to go through all of the programming steps twice, once for each bank.

I’ve only used the radio for a short time, so it would be fair to try to go into details because I really don’t know any of the details as yet. I’ve had maybe 3 QSOs with it since I installed it in the Jeep. All I can say at this point in time is that it does work and seems to work pretty darn well.

The FTM-400 works quite well in actual operation. The receivers seem more than adequate for the job. Signal reports I’ve received indicate that the audio on transmit is crisp and clear, with no problems at all in analog FM mode.

Once you get the memories programmed, operation is simple, very straightforward.

There is a caveat though: Because most of the functions of this radio are accessed via the touch screen, anything except the very basic operation is going to require pulling off the road so you can see and use the touch screen. DO NOT TRY TO OPERATE THE TOUCHSCREEN WHILE DRIVING.

Do I really need to repeat that? In order to do anything except the basics, you will have to take your eyes off the road to fumble with the touch screen. You will run off the road an possibly kill yourself or, even worse, someone else.

I never did figure out why the ARS doesn’t work, or why the default repeater frequency shifts are messed up because, frankly, I can’t be bothered. It’s a minor annoyance and easy to do manually.

Mounting the body of the transceiver might be an issue for some. I just have it sitting in a recess in the center console of the Jeep at the moment, but that’s a temporary solution at best. I’m going to need to rig up some kind of permanent mounting location in the very near future. Wherever it goes, you have to make sure there is adequate ventilation because it does indeed give off considerable heat when in use.

The touch screen isn’t responsive enough. It isn’t like touching a button where you just hit the button and release. You have to physically hold your finger on the screen for a full second before it senses the touch. It is potentially dangerous as well because in order to operate anything on the touch screen you have to take your attention away from driving and focus on the screen.

I would also like to have a little chat with the person who decided now to implement the squelch controls on this thing. In order to adjust the squelch, you have to touch (and hold for a little over a full second) the SQL control on the touch screen. Then, and only then, can you use the knob to actually adjust the squelch level. Because I drive through areas with severe interference from a variety of sources, I’m constantly fiddling with the squelch. Turning it up to cover temporary interference, turning it down so I can hear less powerful stations or more distant repeaters. It’s damned annoying.

What it boils down to, is the 400 worth the very hefty price they’re charging for it?

I hate to say this, but for the average VHF/UHF user, no, it isn’t. The FTM-400 is retailing for around $600 at the moment, and you can get one hell of a nice VHF/UHF transceiver for half that price. The average amateur radio operator is never going to use all of the bells and whistles that make this radio so costly. Digital voice? Frankly, who cares? The ability to send photos to other hams who have one of the compatible Yaesu units? Well, if that’s your thing, go for it. But for the average person it doesn’t matter. The built in GPS? Again, so what? Most of us operating mobile have GPS either built into our vehicles already or can run inexpensive GPS units. Some of the functions might be useful for ARES/RACES groups, but the vast majority of users don’t need the capabilities.