Wow, do we have frogs around here this year! I suppose it’s due at least partly to the wet summer we’ve had and the neighbor’s pond, but the number of them around and the variety is surprising. I ran into this little guy sitting on one of the pepper plants the other day. I almost missed seeing him entirely and ran into the house and got the camera before he took off. He’s such a tiny little thing, about the size of the nail on my index finger.

I was really lucky to get this shot. This guy has been hanging around down at the pond for a while but he’s very shy and he generally takes off before I can get a photo. He sat still long enough for me to snag this photo of him when I had the big camera and telephoto lens along. Amazing bird. And very large too. 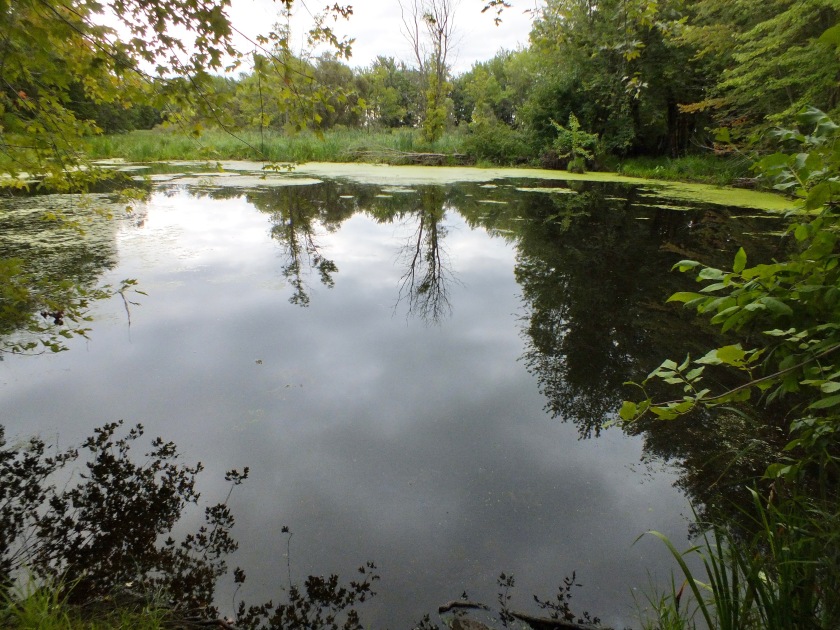 I love going down to this pond along the bike trail. It’s an incredibly rich environment that supports fish, birds, small mammals, ducks and, believe it or not, a family of otters.

When I first saw the otters down there I couldn’t believe it. I had no idea they lived in this area. I know that picture is horrible, it’s a blow-up of what was a crappy cell phone picture in the first place. Believe it or not that black blob in the center is an otter.

There were four of them. I’m assuming it was a family, two larger individuals and two somewhat smaller, almost full sized ones. I’ve only seen them twice. They’re extremely shy and dive underwater and take off as soon as they hear any activity up on the trail.

In the last 20 years these guys have really made a comeback around here. During the summer you’ll see pairs with chicks wandering around the fields. In the late summer and early fall they start to flock up and there will be flocks of 30 – 50 in the fields. They aren’t exactly shy, either, some of them. They think nothing of browsing for food on people’s lawns. Before about, oh, 1990 or so, I’d never even seen one of these in real life. Now there are so many of them they’re almost a nuisance.

Let’s see, what else?

Well, the poor tomatoes are almost done. The only fruit we’re going to get is whatever has already set before the fungus began to get them. Most of the leaves on the lower half of the plants are already gone and it’s slowly but surly making it’s way up the entire plant. Not much we can do about it at this point. Still, we’re getting some tomatoes, so that’s better than nothing. We’re freezing them as they ripen because we aren’t really getting enough at one time to warrant processing them into sauce or soup. We’ll process them once we have enough to justify firing up the canner.

Eclipse fever – everyone seems to have caught it, sigh. It’s getting ridiculous, really. If I hear one more radio station or TV news show going “OMG DON’T LOOK AT THE ECLIPSE OR YOU’LL GO BLIND!!!” I’m going to scream.

The new computer is up and running and working beautifully. It took a while to get the graphics card replaced after the first one was damaged in shipment. And then there was an issue with the BIOS settings but I got that figured out at last. But it’s working now and I’m really pleased with the results. I built it specifically for gaming and it does it very, very well. It certainly isn’t the fastest out there. The 1050 TI card certainly can’t compare to something like the 1080, but it also cost about 5 times less than the 1080 and is more than good enough to give me a darn good frame rate with the graphics options ramped up all the way on the games I use. For a system that came in well under $1,000 it’s excellent. Only thing I regret is that I didn’t opt for a bigger SSD. I might have to do something about that in the fairly near future.

Traffic problems have somewhat curtailed my biking. They have the main highway closed off while they repair the railroad tracks, and almost no one is following the posted detour. Instead they’re out on the backroads where I usually bike. You ever been on a narrow 2 lane (barely 2 lane) country road while lost semis blow past you at 80 mph? It is not fun. The wind blast almost blew me into the next county. So excursions out into the countryside are going to be temporarily on hold until they get the tracks fixed and the highway opened.

Speaking of the eclipse, am I going to watch it? No. Totality is going to be several hundred miles south of here. We’re going to be around 40% or less up here. Besides, the long range forecast for here is rain and thunderstorms anyway. I also don’t really understand what the fuss is about. It’s a mildly interesting phenomena, but eclipses happen all the time, are well documented, and a lot of the hype is being generated just to get you to buy stuff.