This entry was sparked by an article I read over at NPR’s website about the failure of GM corn, and the seed companies desperate search for something to replace it. You can read it yourself by clicking here. As the article points out, one of the original commercially available genetically modified plants, BT corn, is failing. But a lot of my readers aren’t farmers and don’t know what BT corn is or know about the problem it was developed to cure, so let me tell you about that first.

The problem is this guy here: 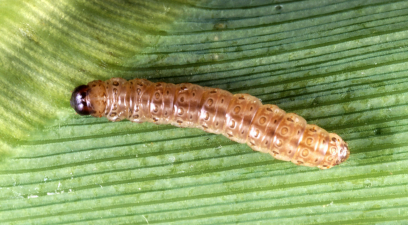 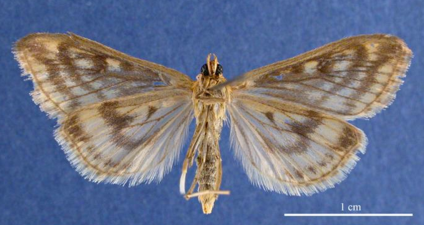 This is the european corn root worm, otherwise known as the corn borer, and its rather nondescript parent moth. The european corn root worm is not native to North America. It first appeared in the US around 1917, and quickly spread throughout the US and up into Canada. The moth itself is harmless. It’s offspring, however, loves to eat the roots of corn plants, tunneling through them, weakening them, reducing yields, and even killing the plant. Over the years it became a serious problem, infesting much of the corn belt. There were pesticides that could kill it, but they are expensive, and a lot of the most effective pesticides are toxic and many have been outright banned because of their toxicity over the years.

BT corn was one of the first genetically engineered plants to be approved for commercial use. It incorporated genes from bacillus thuringiensis, a naturally occurring bacteria that lives in the soil. The modification causes the corn plant to produce a protein called Bt delta endotoxin, which kills the larvae of the corn borer. The BT toxin itself is not new. It’s been available for use as a pesticide since the 1960s, and it has a pretty good safety record. It is generally recognized as safe for humans, other mammals, fish, birds, and most insects.

BT corn worked very well indeed. So well that it quickly dominated the market and a large number of different varieties of BT corn are now available. But there’s a problem. It’s not working very well any longer.

In just twelve years the corn borer began to develop a tolerance for the BT toxin, and it began to spread. We are rapidly approaching the point where BT corn will no longer be effective against the pest and we’ll be right back where we started.

The same thing is happening with the other big GM cash cow, engineered plants like soybeans that are immune to glyphosate, the active ingredient in RoundUp from Monsanto. As was the case with BT corn, it wasn’t long before the so-called ‘super weeds’ began to emerge which were immune to glyphosate. And they are spreading throughout the country.

In both cases, these products were supposed to be quick and easy fixes for problems that have no quick and easy solution. And in both cases these ‘solutions’ were doomed to fail from the beginning. And everyone knew that they were not going to be long term solutions. Even as they were developing these products, the researchers involved were warning that sooner or later the pests they were intended to fight would eventually develop resistance and we’d be back where we started again. They recommended various techniques to help to reduce the spread of resistance. Those techniques were ignored because most companies these days operate on the basis of generating as much profit as possible right now and the hell with the future.

And that seems to be the problem with a lot of the GM products I’ve seen. They’re little more than quick fixes. Very little thought seems to go into determining if the products are going to be viable, useful, over the long term. The focus is profit, as much profit as possible, and profit right now. And hopefully the CEOs can cash out their stock options and bank their bonuses before the whole thing falls apart and leaves the company, and the farmers, worse off than before.

I’m not anti-GMO. Genetically modifying organisms has the potential to be incredibly beneficial. But as long as this current business climate where the only thing that matters is profit, right now, and the hell with the future, remains in effect, it is never going to fulfill that potential.

4 thoughts on “Is The ‘Golden Age’ of GM Tarnishing Already”