While I really like my TS-2000, I wanted something more sophisticated (i.e. more buttons and knobs and shiny bits). I was at the AES show earlier this year and they had the new TS-990 on display, and immediately lusted for the thing. This isn’t really a review of the 990, more of a first impressions kind of thing. I’ve only had it a little over two weeks and I’m still trying to learn all the various options.

Physically the radio itself is impressive. It’s big. I mean really big. Shipping weight is around 60 pounds according to the label. As for size, it’s about the size of a computer tower laid on it’s side. It takes up a lot of desk space. In fact, I had to get a bigger desk to hold it. The one I had the 2000 on just couldn’t handle it.

It’s extremely well made. The fit and finish is superb. Well, considering the price it had better be, eh?

And it is an intimidating piece of equipment, even for a geek like me. Two brilliant video displays (the big one a touch screen), 16 knobs to fiddle with, and a mind bogglingly large number of buttons, most of which have multiple functions, and 14 “soft” buttons which are labeled on the big screen and whose functions change depending on the mode of operation you’re in, and you get one complicated piece of equipment.

Fortunately, basic functionality is not that difficult to figure out, and within an hour of unpacking the rig and reading the first couple of sections of the manual (which frankly could use a bit of work) I had it up and running and working quite nicely, thank you very much.

First a word about the manual. It needs some help. It’s incomplete in some areas. In others it’s obvious that whoever translated it from it’s original language (probably Japanese) wasn’t all that fluent in some areas. All of the essentials are there, but you’re going to have to do some digging and some reading between the lines to figure it out. Don’t despair, though, you’ll get there eventually. (Maybe. I have yet to figure out how to get the sub-receiver to work properly.)

But let’s get on with this, shall we?

Build quality is excellent. Cosmetically the rig was flawless out of the box. One thing that impressed me with both the 2000 and now the 990S is how well it feels. It’s something that’s difficult to describe. When I was looking at the Yaesu and ICOM high-end transceivers at AES, one thing that struck me negatively was how cheap the controls felt. The knobs wiggled, the buttons were mushy and loose. It felt like you were using a mass-market toy picked up at Walmart, to be honest.

Not so with either of the Kenwoods. Everything on these radios is rock solid and substantial. The knobs are solid, with excellent feel and no side play at all. They move with silky smoothness and feel substantial and reassuring. Same with the buttons. They’re rock solid with excellent tactile feedback.

The front panel may look intimidating, but actually it’s laid out with considerable thought, with various controls arranged into logical groupings. 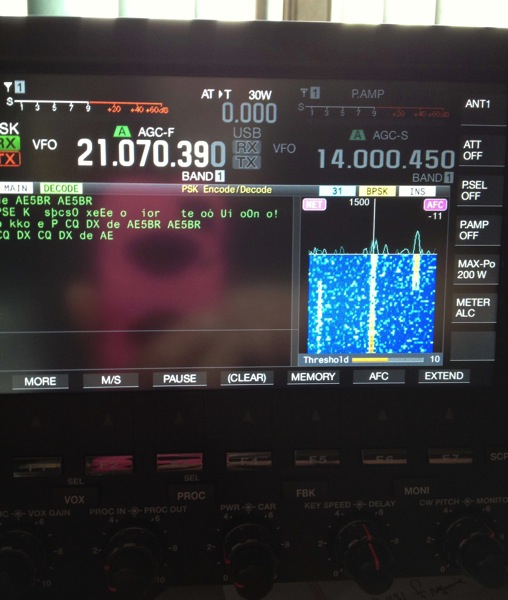 My favorite mode of communications is PSK31/63, so I was curious about the 990S’ built in decoder/encoder for these modes. Basically just plug a USB keyboard into the front panel of the transceiver, kick it into PSK mode, hit the Decode button, tune the frequency you want to use, and away you go. Nothing could be simpler.

It works pretty well, but I’m not about to abandon Fldigi. It took me all of three seconds to begin to badly miss the functions I had on the computer, such as automatically filling in my log, call sign look up and all of the macros. The 990 does have memory slots you can pre-load with frequently used text strings for transmissions, but they aren’t real macros.

Still, it does work nicely and I made a few contacts shortly after learning how to get into the PSK mode.

There are some issues, though, one of which is tuning. You can see the waterfall display to the right of the text screen in the photo above. See that nice clean signal? Seeing signals like that is very, very rare. I took that shot when the noise level was extremely low. Normally the waterfall is so filled with noise that it’s almost solid yellow across the entire display. I can hear a signal, but can’t find it visually.

It also seems to have some issues decoding. Weak signals that Fldigi can decode quite nicely, don’t even show up. I can hear them, I can see them in the waterfall display, but the 990 won’t get a ‘lock’ on the signal and begin decoding. All I see is random noise.

Something similar happens with extremely strong signals. it seems to overwhelm the decoder. Fldigi can deal with them quite nicely, thank you, but not the 990S. So while it can do PSK pretty well, I’m not going to be abandoning the computer any time soon.

I’m sure as I gain more experience with the almost overwhelming number of filter options I can gain some significant improvement in the reception area, but at the moment it’s easier to just us the computer.

Speaking of computers, the 990S is ready to hook to a computer right out of the box. It has a network connector, USB port and RS-232 port on the back. While it isn’t exactly what i’d call “plug and play”, it was far easier to get it working with the computer than the 2000 (which I still have issues with)

Kenwood has rig control software for the WinOS available as a free download from their website. Nothing is available for Mac or Linux, of course. I dug out my cheap Toshiba Win7 laptop and tried it, and the software does work. You can control pretty much all of the radio with it, but frankly it’s of limited usefulness, at least for me.

On the Win7 machine I tried Ham Radio Deluxe, which was an utter failure. Fldigi worked, of course, because it relies primarily on sound input/output and doesn’t need to directly control the radio. Flrig didn’t work at all.

The problem is that the 990S just hit the streets in March, I think, and no one seems to have updated their software to work with it yet. I tried a variety of Kenwood protocols without success on the Win7 machine.

Curiously, Fldigi and Flrig both work with the 990 on the Mac. Sort of. I’ve been using the TS-2000 protocols in Flrig and it sort of, almost, kinda works. At least to the point where I can change frequency from within Fldigi/Flrig. (pretty much nothing else works for rig control, but at least the frequency will change correctly, which is better than nothing).

Why does it work on the Mac and not on the Win7 machine? Well, pretty much nothing works on the Win7 machine when it comes to my amateur radio software. It loses drivers, crashes, can’t find com ports… The list of failures goes on and on.

THis is getting a bit longer than I’d intended, so let’s wrap it up.

What it all comes down to, is the TS-990S worth the money? This is one hell of an expensive radio, after all. This thing will set you back around $8,000. For me it is. I became addicted to amateur radio the moment I started. But for others who aren’t as active, probably not. You can put together a complete ham station for less than the cost of this single rig. It all depends on your wants and needs. The 990 is an exceptionally fine piece of equipment and I’m having an absolute blast with it, and in the long run that’s what matters.