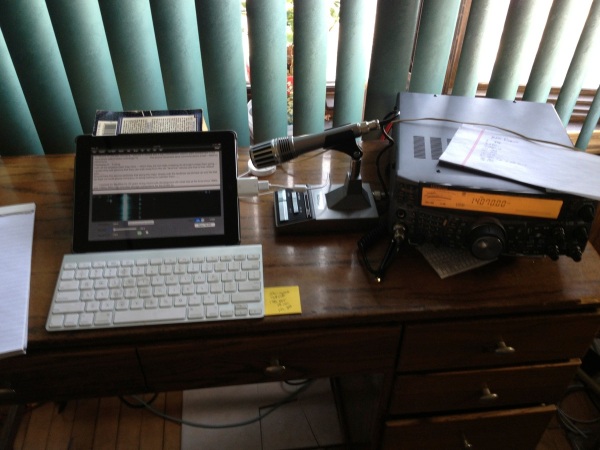 So I’m a grouchy farmer so why all this stuff about amateur radio? Because we still have snowbanks 4 feet high around here despite warming temperatures, so I mess with radio stuff.

I’ve been using an iPad app called PSKer which works far better than it has any right to. It ‘hears’ the PSK31 tones from the radio and decodes them, and when you type something in, it sends the PSK tones out the speaker. But background noise is an issue. I am now using Apple’s camera adaptor with the USB connector on it, with a USB microphone adaptor plugged into that. The output from the speaker on the radio goes into that, and bingo, a nice, clean display without any hash from background noise.

Unfortunately I still haven’t got things set up for transmit, hence the microphone aimed at the iPad’s speaker. It works. Sort of. But just having a truck roll by outside can cause havoc. I need to get the output from the adaptor into the microphone inputs on the radio, and hopefully figure out how to trigger the PTT circuits at the same time, or perhaps use the radio’s VOX capabilities to deal with triggering transmit.

This will give you an idea of what you can do with little or no money, though. Except for the Kenwood, everything else was stuff I had laying around the house already; iPad, camera adaptor, USB mic adaptor, etc. The only thing I actually had to buy was the PSKer software, and that was all of about $3.